Update - Results are in!Time to get political, as I sometimes do. On November 6th, 2018 it will be time to exercise our civic duty to vote once again. Republican, Democrat, Libertarian, Federalist, Green Party, I don't care what your party affiliation it is your duty as a citizen of the United States, and Missouri to get your lazy butts to the polls and vote. Voting is your RIGHT, not a privilege. Standing for the National Anthem is nothing more than a sign of patriotism, but voting is your DUTY. If you truly want to honor those men and women serving in the military then VOTE. If you truly believe in your country and what it stands for than exercise one of your many RIGHTS, and vote.

Okay? There now, let's get to the specifics. 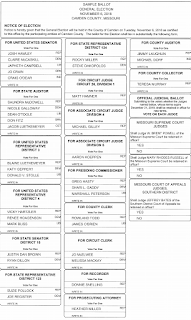 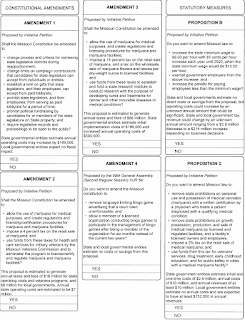 The above images are from the sample ballot provided by Camden County so you have time to review what's at stake before heading to the polls. Now, I'm not going to go over the individual races for the US Senate or Representatives since most people know who they will vote for beforehand, and we've all been bombarded by political ads enough to know who these folks are by now. But, I would like to spend some time on the amendments being put forward.  There are four constitutional amendments, three statute proposals, and one county specific tax issue on the ballot. First the difference between a constitutional amendment and a statute is an important one. A statute is the specific language that defines a law. Often when we think of something as being a "law" what we're really referring to is a statute, passed by legislation and enforced by the executive branch. An amendment is simply a modifier to an already existing statute, or other legislative resolution.  Clear?  Yeah, me neither, but consider this, it usually takes a 2/3 majority to repeal or change an amendment, but a statute can be changed by a simple majority. In a sense an amendment is more permanent and less prone to efforts to change it. The interesting part is that three of the four amendments were put on the ballot by petition initiatives, meaning everyday citizens banded together to get it on the ballot, and not proposed by legislators. Two of the three statutes were put on the ballot by petition as well.

I'll try to keep this summarized, but you'll notice a difference between the three petitioned amendments and the one proposed by legislators.

Amendment 1 - Is basically aimed squarely at limiting the gifts and perks that come from being a politician. But you can read the language yourself, it's pretty straightforward. This is an amendment only We The People could have ever got on the ballot. You think any legislator would like to see this passed? Petitioned.

Amendments 2 and 3 - Basically both call for the legalization of marijuana for medical use only. Neither is a recreational use amendment. My understanding is that there are two and either one is enough to make medical use legal, but if both pass both taxes will enact. I don't see any downside to this one and having witnessed the side effects of chemotherapy up close and personal, I can attest the affects are nothing short of miraculous. If it's benefits for other ailments are equally viable for such things as pain management or autism, then we owe it to those folks afflicted to make it accessible. It will generate revenue. Few ballot initiatives are such win-win scenarios. Petitioned.

Amendment 4 - The only amendment proposed by the general assembly and boy does it show. Bingo. Bingo? I need to amend the state constitution for Bingo? Um. Sure. Can't say I have a dog in this hunt though.

Proposition B is a minimum wage increase. Old economic arguments either way apply.

Proposition C is another marijuana law issue. It's sort of a companion piece to the other two amendments I think. While the amendments may make medical marijuana accessible, this statute will make it actually okay to possess it I think, provided you are entitled by medical necessity. Not sure what would happen if either amendment passes but Prop C doesn't. Hope we don't have to find out.

Prop D is a gas tax. Again with the gas tax eh? The governor has made noises that he would go ahead and impose this tax should this proposition fail at the polls, so it may be a mute point. Again, no dog in the hunt here but my own.

The use tax proposition for Camden County is just a way for Camden County to collect taxes on purchases not made in the county. It's an old trick done in many states. Vote yes if you want things to be taxed more I guess.

I encourage everyone to take a look at the ballot themselves and carefully consider the future, not just for yourselves, but for everyone.

PLEASE VOTE! Take the time. Make the time. I promise you'll feel better about yourself if you do, no matter how things turn out.