Just to show it's always been crazy fun! 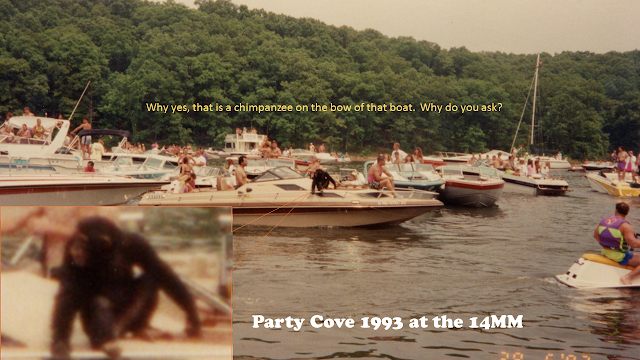 According to the Missouri Climate Center, precipitation for the month of May seems to be the harbinger of summer temperatures.

"It is evident summers tend to be more seasonable or cooler as well as experience near average to wetter conditions following an unusually wet May. The rationale behind these occurrences are that May can be considered a transition month into the summer season, where weather patterns in the Midwest tend to be more stagnant. An established or recurring weather pattern in May could stick around for the summer. Additionally, wet soil moisture conditions at the onset of summer can act to suppress maximum temperatures when more of the sun's energy will be used in evaporating available moisture."

The pink shaded cells represent a higher than normal temperature average and blue below normal, with white being within the margin of error for normal temperatures.  As we can see, 7 out of 20 wettest months were followed by below normal temperatures for June, July, and August, with another 8 following the average. Only four times has a wet May been followed by above average temperatures and only one of those with higher precipitation than average as well.  It can also be pointed out that in half of the times when summer temperatures were seasonal or below average, the following summer rainfall totals tended to be completely average while three out of the four hotter seasons showed rainfall well below average.

Below is the graph provided by NOAA for temperature and precipitation outlook for Summer 2015 indicating they were already predicting mild temperatures and above average precipitation for our area.

With June 2015 ending we can look at the average temperature and rainfall for the month to see if this is indeed the trend.  My guess is that with a sampling of only 120 years worth of data there is not enough sample points to make for any meaningful correlation.  Indeed we see temperatures and precipitation are not supporting the historical trend indicated by the Missouri Climate Center. It may be, due to climate change, and entirely new trend is developing.
The following graphic is for precipitation above or below average for the month of June.
The above indicates that for the month the average departure from the mean statewide was anywhere from 1-10 inches above normal.  For the tri-county region of Lake of the Ozarks, it was 4-6 inches, well on its way to a record of some kind I'm sure.

Below is a similar graph indicating temperature deviation for the month of June. Here we see a above average data for the Lake area by 1-2 degrees.

So far this summer has started off warmer and wetter than average, contrary to the conditions predicted by the data. In fact, this summer is on track to being only the second time where a wet May was followed by warmer temperatures and higher precipitation. The other season of wetter and warmer weather occurred only five years ago, in 2010, and may represent a more important trend to be aware of happening. Whether temperatures and precipitation follow for the remainder of the summer remain to be seen, but if they do this summer will likely be making a new mark of its own in the top 20 wettest Mays in Missouri.

Boat Towing - Help Is Just a Phone Call Away

There was a time when it was not too uncommon to see a boat being towed back to the dock or marina by some good samaritan, but you don't see much of that anymore, and for good reason. For vacationers, it may seem like Lake Ozark boaters are unwilling to help if they are in need of assistance.  What gives?

Towing A Boat - Leave It to the Professionals

Choosing A Vacation Home Rental At the Lake of the Ozarks

The lake has a variety of accommodations for any style vacation, whether you want to stay a couple of weeks, or just a quick overnight visit. If rental homes are your style, here's a little help on how to best select a home at the Lake of the Ozarks that meets your needs.  There's a few tips on how to insure sure you get your deposit back as well.

Choosing a Vacation Home Rental at the Lake of the Ozarks
at 8:53 AM

Despite all of the rain, May finished just below full pool, but a foot above the five year average for this time of year, as indicated by the dotted orange line.  As we can see by the green discharge rates peaking at licensed maximum of 35,000cfs, Ameren has been generating a lot of electricity. Discharge rates nearly maximum around the clock have a significant impact on the Osage River levels below Bagnell Dam, as can be seen by the chart below for the same period of time.

Notice that these swings in level starting on the 12th are almost 10 feet and remain high into June.
at 3:26 PM