How Much Electrical Power Can Bagnell Dam Produce? Part 1

Go to just about any website related to Lake of the Ozarks and you’ll run into the inevitable “facts” page quoting all sorts of interesting numbers regarding Bagnell Dam, everything from its physical size and construction to the amount of electricity it produces.  Most of these numbers are easily confirmed such as the overall length of the dam or its height, but others such as the amount of water impounded,or the average flow are more difficult to reach consensus. 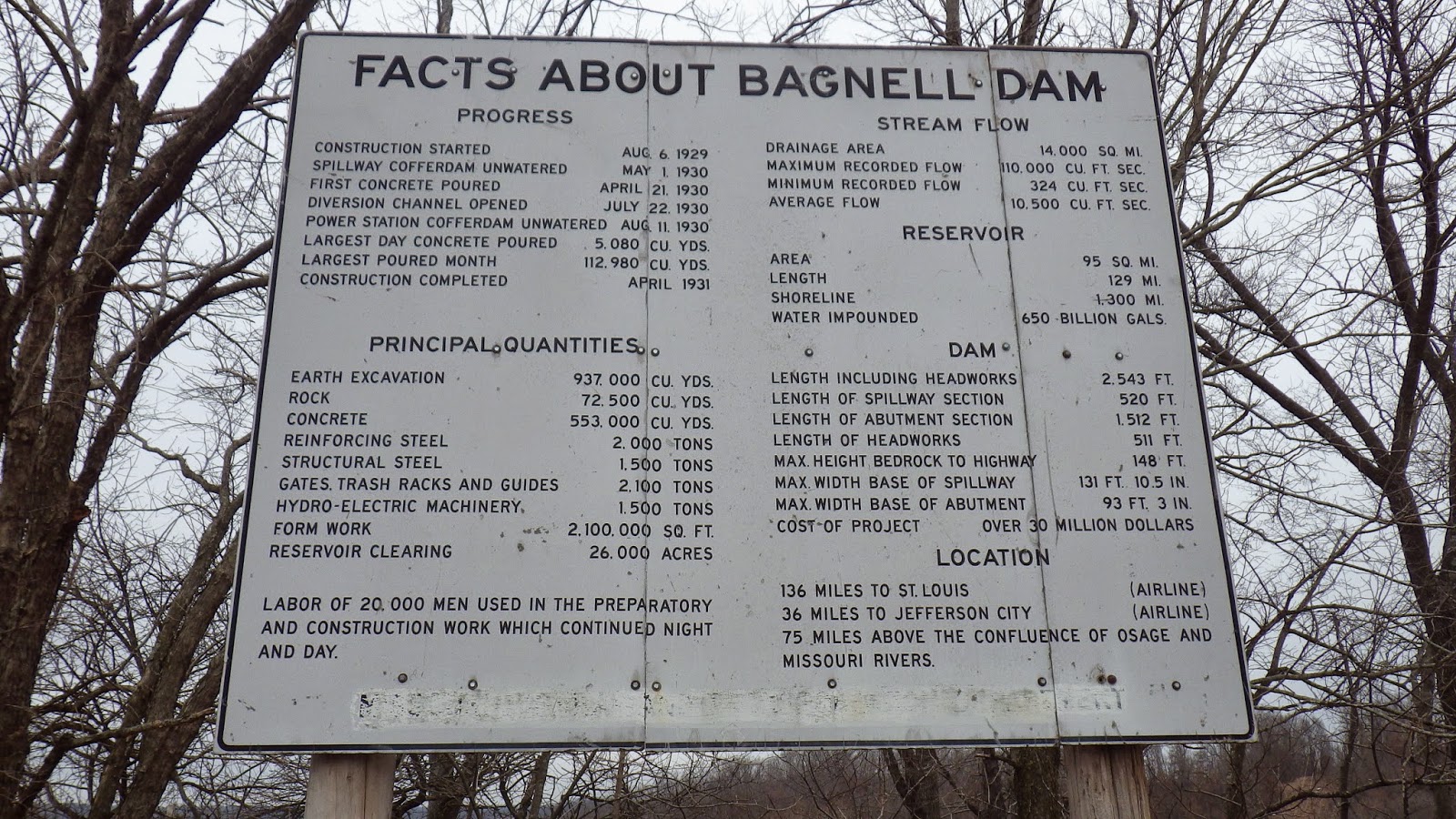 Interestingly, one of the most important numbers, often quoted but rarely duplicated, is the amount of electricity Bagnell Dam produces.   This seems like an odd number to vary from source to source given its 83 years of operation, but a quick search of “Lake Ozarks facts” produces a variety of conflicting numbers.

On Mike Gillespie's “dam facts” web page, it is stated that Bagnell Dam operates eight turbines, each producing a maximum of 21,500 kilowatts (KW), for a total of 172 Megawatts (MW).  While a bit simplistic, this stated capacity has the virtue of at least getting the basic math right (8 turbines x 21.5KW = 172MW).  If we include the two “house” generators each producing an additional 2,100KW, we arrive at what the Federal Energy Regulatory Commission calls the “authorized installed capacity” of 176.2MW.  However, this is not the current maximum capacity of Bagnell Dam.
LakeOzark.com/FunLake.com provides a more enigmatic number, “The facility with eight generators has a maximum capacity of 215 megawatts”.  But the Tri-County Lodging Association that runs FunLake.com is more interested in promoting tourism than quoting facts so we’ll give them a pass.
There are several other lake area sites that provide slight variations on this number, but from the International Water Power and Dam Construction, 2005 comes another number, “Completed in 1931, the 226MW Osage Plant and Bagnell dam created Missouri’s Lake of the Ozarks”.  Again, how this number was reached is left unsaid.
Another outside source Hydroworld, an industry website, hints at a possible reason for the various numbers, quoting power generation for three different times in the life of the dam:
1931:  201MW
Quoted in a Feb 2009 article:  231MW
Quoted in 2014:  242MW

The 1931 capacity of 201MW is a perplexing numbers since it is far more than the quoted “install capacity”, and even more strange when considering only six of the eight turbines were even installed prior to 1953.  The 2009 stated capacity of 231MW can be attributed to upgraded Units 3 and 5 completed in 2002, along with upgrades to Units 1, 6, 7 and 8 in 2008.  These upgrades increased each unit’s capacity from 26MW to 33.5 MW.  Again however the numbers don’t quite add up as accounting for all 8 turbines, including the six unit upgrades from 26MW to 33.5MW, the total output power comes to 253MW.

Ameren UE, being a publicly traded company, provides its own information regarding Bagnell Dam’s energy capacity.  In its corporate fact sheet, Ameren UE rates power generation at 240MW, producing 500 million Kilowatts (500,000MW) per year. The 2007 FERC license quotes the total annual production at 636,397MWh but recent turbine and generator upgrades have increased this output.  As reported in Hydroworld, “The upgrades should increase the project's maximum hydraulic capacity by 1,580 cubic feet per second, resulting in a 6.5 percent increase in annual generation of about 41,600 megawatt-hours.”  When added to Ameren’s stated energy production, the improved performance brings the total annual production to about 678,000MWh

An important distinction between total annual production and output capacity can be seen in the units used to express power.  Whereas capacity is rated in essentially “watts” (the standard unit for electrical power), production is expressed in “watt-hours”, adding the dimension of time to the rating.  The watt-hour rating for any energy production facility is not to be confused with total capacity, it is typically only used to express actual energy sales but can still provide some useful insight.  Using the latest stated capacity of 678GWh the amount of time needed to produce that much energy can be calculated by simply dividing total energy produced by the maximum stated capacity of 240MW.

Considering a year as consisting of 8760 hours, Bagnell Dam must generate the equivalent of maximum output nearly 1 hour of every 3 on average to meet this sales potential.  But why build a dam capable of generating almost three times the amount of energy only to utilize it a third of the time?  Why not simply design the dam to operate with the same outflow as average inflow and run it continuously? Understanding how hydroelectric dams work, from the basics of the energy potential of gravity to the practicalities of kinetic flow and usable energy, we can apply basic engineering analysis to dissect the current energy production of Bagnell Dam, as well as it limitations.

Next:  Energy of the Osage