Why is the Lake of the Ozarks the "Best Lake" in the U.S.?

If you are familiar with the Lake of the Ozarks, by now I'm sure you've heard that for 2016 it was voted the best recreational lake in the U.S. by a reader survey done by USA Today.  It was not stated how many readers took the survey, but the list of ten was whittled down from a selection of 20 lakes.

So why exactly does the Lake of the Ozarks rank so highly when compared to other popular lakes such as Lake Powell (#10), Lake Tahoe (#5), or even Lake Michigan(#7)?  What makes a lake popular? What makes a lake ideal for "recreational use"?

Why is the Lake of the Ozarks the "Best Recreational Lake"?
at 3:30 PM

Black Bears at the Lake of the Ozarks?

June 2019 Update - A bear was captured on video swimming in the Lake of the Ozarks. LakeExpo has it here.

I've also checked the Missouri Dept. of Conservation for the map I've referenced in the original article and they seemed to have updated things a bit. Here's the current map of bear "interactions" for the state. It's interesting to compare with the map from my original post. The seem to be moving north and westerly. The original post map has them mostly concentrated in the southeast. Apparently bears are on the move and finding the Lake area attractive. The "mortality" part of the graph presumably means the bear, not people. I've never heard of anyone being killed by a black bear but it could certainly happen I suppose (mother bears are particularly protective). I'm a little surprised by how many are in the St.Louis area. 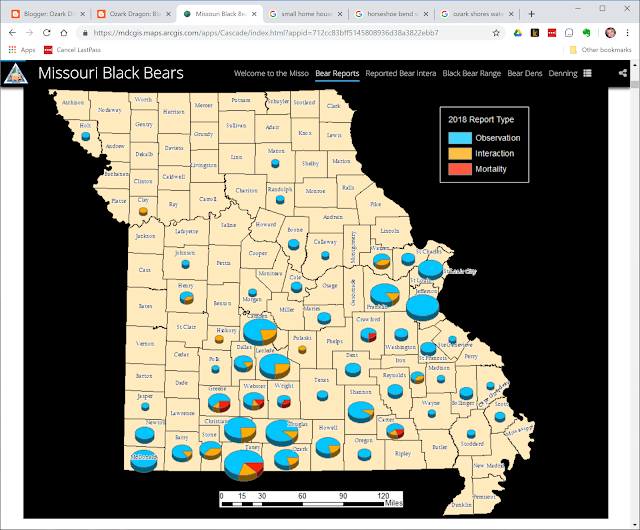 On Saturday June 25th 2016, a black bear was spotted in a tree near the Grand Glaize Bridge at the Lake of the Ozarks.  We do live near the largest state park in the state, so it is little surprise that mountain lions and bears have found favorable habitat here.  This bear was pelted with bean bags by the conservation department to goad it into leaving the area, but was otherwise unhurt. 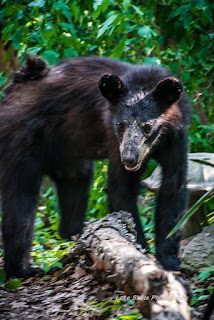 Everyone may now freak out.

Done?  Good, because it's not a big deal.  Black bears are very common in Missouri these days, especially in the south and southeast where there is plenty of undeveloped land. The Missouri Department of Conservation tracks many bears, but it does not appear that this one was tagged or monitored.

To me, this does not look like a healthy animal.  There's a spot of mange on the back side and it looks malnourished. But don't let that fool you, any bear is a formidable animal when agitated and should never be approached. It is very likely that this bear is living off human refuse.  Homeowners in the area would be wise to take steps to minimize the appeal of their areas to a black bear's appetites. No one need go out and buy bear proof trash receptacles, but there are some simple things that can be done to discourage their prowlings.  Eating garbage isn't any better for animals than it is for humans.  See specimen on the left.

The Missouri Department of Conservation has a geolocation system for black bears so if you know a particular bear's tag number you can see its territory.  Below is a heat map of all the bears MDC is tracking.  As you can see there are no hot spots around the lake area despite several sightings over the years. 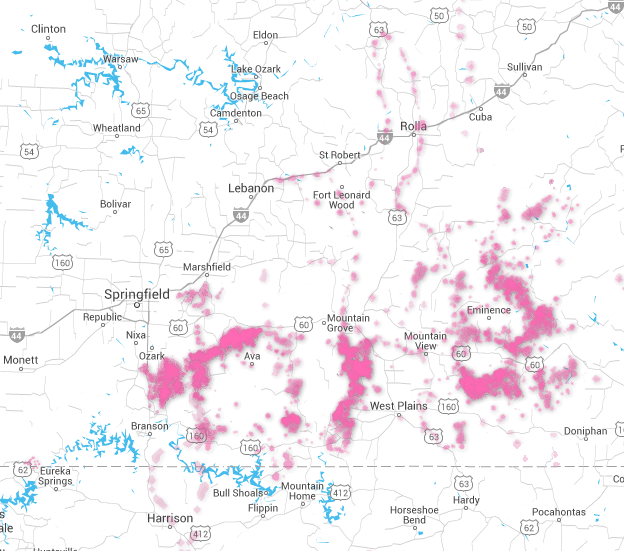 This isn't the first time a bear has been spotted in the lake area recently.  In July of 2014 a black bear was found dead in the Gravois Mills area after becoming entangled in barbed wire fencing. 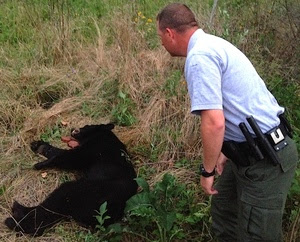 Lake levels and flow rates for June at the Lake of the Ozarks were mostly on the low side compared to the five year moving average, ending at a comfortable 659.27', less than a foot from full pool. With the memory of the floods in 2015 still fresh in everyone's mind it was a little comforting to see some capacity available with all the rains forecast for the 4th of July holiday weekend.  Daily power generation (indicated in green by flow rates above 5000 cfs) was typical for summertime energy demands.