A new decade is upon us so it's time to take a look a the decade that was in terms of data. Getting right to it, below is the candlestick summary chart for lake levels and flow for the period of 2010-2019. If you're not familiar with this style of chart you can click here for a full explanation.

The graph (click to enlarge) is a construct of 10 years of hourly data consisting of 87,600 data points. While I wouldn't dignify that much data as Big Data, it is a significant enough number that certain trends might be statistically significant.

So what can 87,600 data points tell us about the Lake of the Ozarks? Obviously it can show what has happened over the past ten years, but more interesting is that it may also indicate what will happen in the future. I'm not talking about predicting daily lake levels, or flow rates, but rather trends. One trend that stands out, almost visually, is the gradual increase in total flow over the years. If you compare the actual data for total yearly flow from 2010-2014 to the period of 2015-2019, you'll see that 10.652 trillion gallons passed through Bagnell Dam in the first half of the decade and 16.107 trillion gallons in the second half. That's an increase of 66% which is rather significant. You can easily see this trend by the graph alone comparing the left half orange bar heights to the right half. The latter half of the decade also contains the highest monthly flow rates and two record flooding events in July and December of 2015.

If that's not obvious from the first graph, let's look at a comparison of the first five years of the decade and the last from an average daily flow point of view. Below is a two-line graph, the green representing 2010-14, and the red 2015-19. From this graph it's even easier to see the difference in the latter half of the decade. With the exception of early spring, which in of itself may be statistically relevant, the period from 2015-2019 consistently shows a higher average flow rate. Even more interesting is that flow rates remain high throughout the summer months, rather than tapering off after spring. This means, more water, flowing all the time.

The amount of water that has flowed through Bagnell Dam this year is truly astonishing. Here's the big picture. 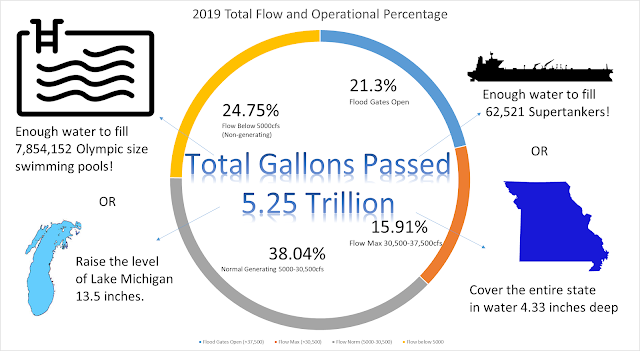 Nearly 3 times the "normal" flow for one year due to flooding. While the Lake of the Ozarks suffered no direct effects of the surrounding waters, over 37% of operational time was spent in maximum turbine flow conditions. How much of that interpolated into power generation, only Ameren knows, but it was there for the taking.

Here's how December itself looked on the daily candlestick graph. 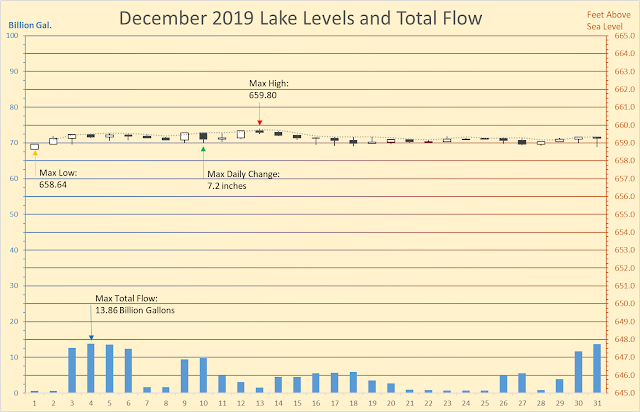 And the hourly detail. 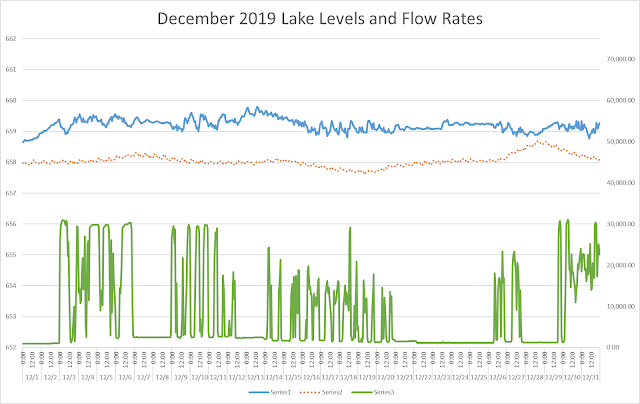 And finally we can now see the daily candlestick graph for the entire year. (click any image to enlarge)

And the monthly summary version 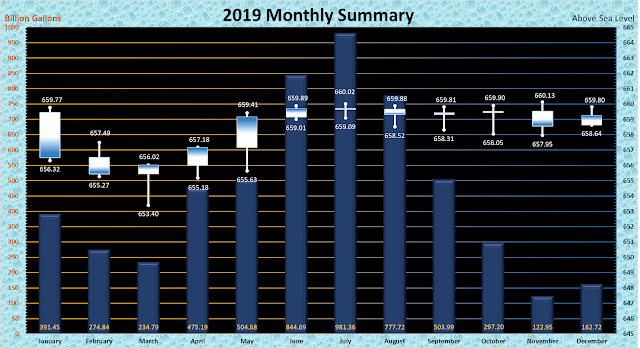