The Boating Guide to Party Cove

Blogger's Note: I have heard enough feedback from this article to reiterate that this is a Boater's guide to Party Cove, not a "Survival" guide.  I wrote this to help those whose job it is to negotiate a boat in Party Cove, namely the boat captain, without any major issues or trouble with the law. If you want general advice on how to "survive" a trip to Party Cove, there's really only one piece of advice to give: Know your own limitations when it comes to having a good time and help those in your group that may not heed such advice (we all have our days). - B

Every large lake in America boasts a "party cove" but the Lake of the Ozarks likely hosts the largest one in the U.S.   Located within the state park, the official name of the party cove is Anderson Hollow Cove and it is actually the third location of party cove since it started.


The party cove was first located at the 6 mile marker(mm), which still bares a relic of this time, an anchored sign stating no tie-ups allowed (no one can tell me how *that* got approved!). Then, for many years, the second location was the 14mm until the new toll bridge was built and housing development on Shawnee Bend forced everyone into the state park where anchoring and tie-up rules are more relaxed. Some argue there was a fourth location, prior to Anderson, a large cove at the 19mm, but that was always a great cove and a popular alternative place to play, but it too has succumbed to development and no longer used.

The current Party Cove is located just outside of the 3mm on the Grand Glaize arm of the lake as shown on the map below. 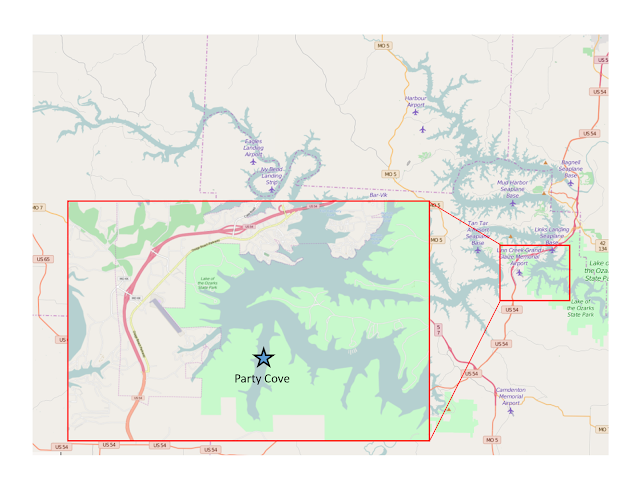 The reputation of the party cove as something of a "Sin City" on the water is not entirely undeserved and it would be polite at least to say that it is adult oriented, but there areas where families hang out, outside the main thrall of boats where people do sometimes get carried away (literally). Despite its reputation, the party cove started, and still  is, really just about boat enthusiasts joining with other boaters for a day of fun on the water.  If you like to meet new people, from all walks of life, then party cove is your destination to see, and be seen.

There are the expected conflicts with law enforcement whenever alcohol runs freely and the mindset of being on vacation is combined with crowd exuberance, but the party cove also presents challenges for any seasoned captain whose responsibility is for the safety of their passengers and the protection of their assets, typically a very expensive boat.

One can easily imagine with the number of boats and people involved, the risk of injury or property damage is ever present and law enforcement is always present.  Laws against BUI(Boating Under the Influence) and BWI (Boating While Intoxicated), no wake, or even paddling a kayak without a life-jacket are enforced with little, if any tolerance.  Water Patrol expends a lot of resources in party cove, including help from the U.S. Coast Guard on holidays, and all done in the name of public safety.  Enforcement in such a congested area is often difficult and authorities tend to stay out of the main crowd of boats content to patrol the peripheral areas or at the mouth of the cove as boaters enter and leave.

Some tips for the boat captains:

Make sure you have enough Coast Guard approved PFD's (life jackets) aboard for all passengers, including a throwable PFD (think seat cushion) if your vessel is over 16 feet in length. Check to be sure all other safety equipment such as fire extinguishers are functional. "Courtesy safety inspections" are a common occurrence and infractions tend to lead to greater scrutiny. Making a safety inspection quick and easy is the fastest way to getting back on the water and on your way.

Ensure that your boat is in good working order!   Navigating the party cove can be tricky, and your boat needs to be working properly to do so safely.  If your boat has trouble going in or out of gear, dies when shifting, or otherwise has a problem that makes maneuvering difficult, you should know that stops can be abrupt, with space between boats and swimmers negligible.  Captain's need to rely on their crew for line handling and spotting swimmers and other boats.  Boats and people get crowded up very quickly, and it sometimes takes an able crew to keep things from getting damaged, or people from getting hurt.  Be aware though, as captain you should be prepared to handle things by yourself, especially at the end of the day when the best your crew may be able to manage is to just stay out of the way.

Do not allow passengers to ride on the back of benches, seats, or on top of engine covers (sundecks) unless your boat is ringed with railing 6 inches high.  Passengers must be seated, or standing properly while underway, even if just idling.  If the boat is in gear, park your rear. This rule is somewhat lax in the deepest part of party cove where boats loop around for a boating version of cruising the strip on a Friday night (the "gauntlet" as we used to call it) but don't count on leniency.  If you're entering or leaving the cove this rule is strictly enforced as boats must proceed at no-wake speed and it can take awhile to reach the main group making it very easy to forget to not sit atop benches and sundecks. Watch your wake, it's guaranteed Water Patrol will be.  Again, it is a long cove and it can be tempting to kick a small wake. These two rules are the ones broken the most and almost guaranteed to get you pulled over. Take your time, the party is not going anywhere.

Take plenty of bumpers for your boat as others typically don't bring enough for theirs.

Have plenty of line (rope).  You can never have too many lines for securing things and I'm always amazed at how many people show up (cough -rentals!) without a single one.

Bring at least one anchor.  Anderson Cove is wide and open and any significant wind (+5mph) can whip a group of boats around easily.  The big boats have big anchors, but they can't hold an entire line in a strong wind as the bottom of the cove is very silty and relatively shallow which makes it difficult for anchors to take hold.

Be helpful and patient with other boaters, the party cove has visiting boaters ranging in experience from beginner to expert, with all sorts in between.  A little courtesy can go a long way to keeping minor problems from becoming large headaches. Get acquainted with the boaters around you. Cooler heads prevail.

Don't stray too far from your boat and have an exit strategy. It's amazing when I see boat owners disappear for hours on end leaving people on their boat who don't have a clue what to do if an issue arises. With so many boats tied together one boaters problem can soon become everyone's problem. A sudden storm, or an anchor that suddenly breaks loose can strain lines, and many times you may find it is simply safer to untie from the group rather than fight to keep it together. That's hard to do without a captain at least nearby.

Be respectful of other people's property.  Sound advice in all areas of life, but take care of the boats next to you, and they'll do the same.  It's a boating thing.

Stay away from aluminum pontoon boats, and don't tie up to one unless you're in one yourself. Trust me on this one. I'm not disrespecting pontoon boats, I like them actually and will probably own one someday, but there aren't enough bumpers in the world to protect fiberglass from the sharp edge of a piece of aluminum.

And the BIG ones:

Do NOT operate any watercraft under the influence of drugs (legal or otherwise).

Do NOT operate any watercraft under the influence of alcohol.

A captain's job is a lonely job, if it's done right.  As captain you may be tempted to join in the libations, but remember the same .08 alcohol level limit for operating a car, applies to all watercraft in Missouri and the consequences of getting can be just as severe.  This is the single biggest problem at the lake for vacationers unfamiliar with the law, and violators receive absolutely no leniency when caught.  If you want to play with everyone else then charter a boat, there are plenty of services available to do so and has the added benefit of not having to deal with all of the above.  Flirt with drinking and boating it if you want, many do, but remember you are being watched.


The party cove is not without its detractors, there are those who would pass laws that would make it impossible for it to exist.  Tragic accidents are rare but when they happen it often stirs the fervor of reigning in this kind of activity, but the only method that could work is by passing draconian laws such as restricting the number of boats that can tie together in a group.  For the most part, tens of thousands of people have enjoyed the party cove at the Lake of the Ozarks over the decades, and by taking responsibility for our own behaviors we can demonstrate these laws are not necessary, and ensure this tradition will go on for many years to come.