Pelicans at the Lake?

I've seen just about every kind of critter common in this part of the U.S. but I have never seen a pelican in these parts before. I should have at least attempted to take a picture, but as someone who has spent a lot of time on the ocean and lived near it, I know a flock of pelicans when I see one, and last night I saw one heading north, seven birds in total.

Was I mistaken? Could it have been another large bird? I'm very familiar with the few large species of birds in the area, Canadian geese, eagles, hawks, buzzards, and blue heron , but these birds were certainly not any of those. I only saw them as they flew almost directly over head about two hundred feet, but the underside wing coloring, the shear wing span, and of course their distinctive head was unmistakable. They looked like this: 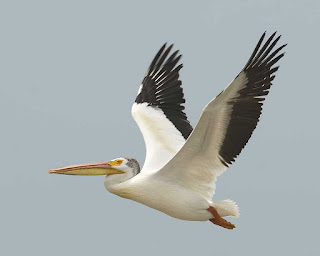 A quick check on the Audubon society's web page confirmed that what I'd seen was indeed American White Pelicans. Pelicans. At the Lake?  Yes.

The Audubon Society has a map of their territory. 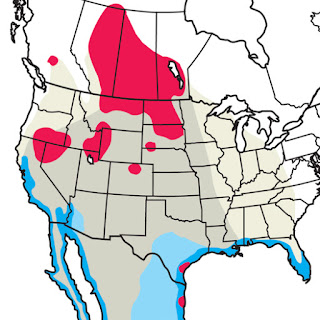 The grey area, which includes the Lake of the Ozarks (barely) is where white pelicans are listed as "common migration", but apparently small groups of "wandering" pelicans can go just about anywhere. The birds I saw were indeed heading north by northeast and didn't appear to have any intention of stopping. Is it odd they would be heading to breeding grounds this time of year?

Interestingly enough, the Audubon's website has territory projection map that shows the range of these birds increasing due to climate change.
at 9:25 AM

Of course, leave it to me to deploy a fancy new candlestick chart during one of the most inconsequential times of the year when lake levels and flow rates are about as stable as they get. The charts below include a link to my shared folder so you can download a copy of the image yourself, or just view it using your own software. I've included the same old chart I've been using for years just for comparison and details.

Total Gallons through the dam this month: 43.91 Billion 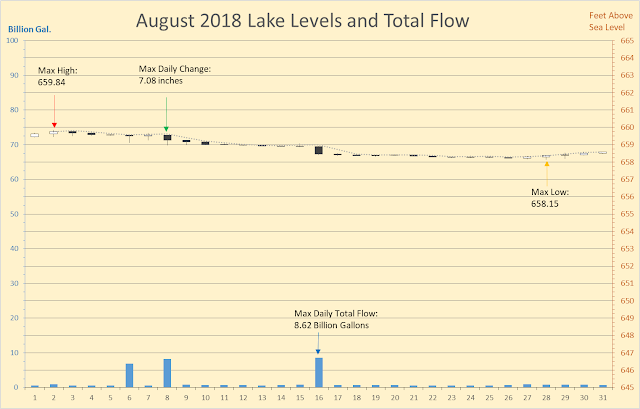 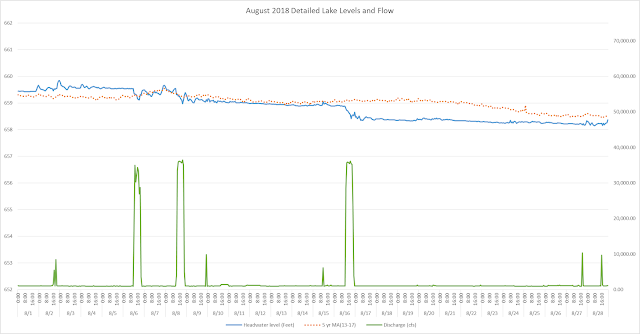