Anyone familiar with my blog is probably wondering why I haven’t been on “flood watch” lately given the events going on around the area. The reason is simple, the Lake of the Ozarks is not in any flood condition (above 661’) right now. The reason is that the Army Corps of Engineers have been using Truman Dam for what it was built for, flood control (click here for current conditions).

While Truman Lake has reached a record 739.82ft above sea level, the Lake of the Ozark levels is well within normal range for May  It's actually about a half a foot below what is considered full pool, so there is some wiggle room for storage. 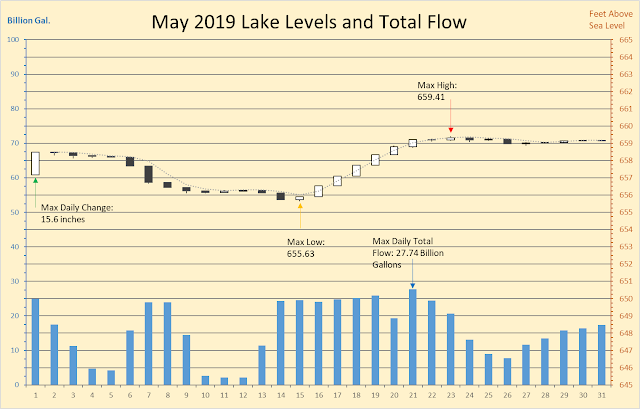 A brief opening of Bagnell Dam flood gates this month (seen above on May 21st with outflow above 25 billion gallons/day) was simply to allow Truman more outflow to increase its potential holding capacity should more rains come. Ameren, which operates Bagnell Dam appears willing to maintain maximum generating flow at to allow as much water as Truman is permitted to release. The Lake of the Ozarks is NOT a U.S. Army Corps of Engineers lake, but Truman Dam is and releases flood waters in coordination with other USACE dams all along the Missouri/Mississippi Basin. The amount permitted is based on flows downstream of Bagnell Dam on the Osage and Missouri rivers, not the needs or desires of stakeholders at the Lake of the Ozarks, although there is an official Memorandum of Agreement between the two operators to coordinate flow release. Ideally in high water conditions, the Lake of the Ozarks simply matches flow from Truman and passes it through to the Osage River, not just by turbine flow, but flood gate as well if necessary. As of today, flow rates are high, and for residents along the Osage River things look grim, but for Lake residents and vacationers the Lake of the Ozarks is at normal levels with only heavy run-off debris in the lake to contend with avoiding. 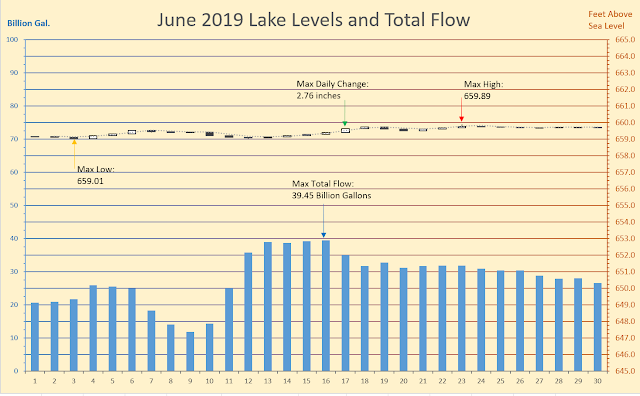 Along the Missouri and Arkansas rivers though, things are far worse.

The Arkansas River is reaching historic heights, and levels along the Missouri and Mississippi are starting to look reminiscent of 1993. I guess “Thousand Year” floods are more like 25 years now. But don’t worry folks, climate change is a hoax. Nothing to see here, right? Sorry, a bit of sarcasm leaked out there. You know I try to stay out op-ed pieces (I’ve got a whole other blog for that!)

So, what makes the Lake of the Ozarks so special to be spared the ravages of flooding? Bagnell Dam was built for two things only, hydroelectric power and tourism, not flood control. Flood control is Truman Dam’s job, that is its purpose for being, and maybe generating a little power along the way. A third purpose was to bring economic development to the area, but that never quite happened, especially with the Lake of the Ozarks sucking all the air from the room, so to speak. The success of the Lake of Ozarks is due in no small part to Truman Dam and its role in flood control, but the Truman Dam and Reservoir is only one part of a much larger system that must be coordinated on a vast scale in order to be effective.

This is a good time to explain just a bit about what I’ve just said about the Osage, Missouri, and Mississippi River Basins and how the Lake of the Ozarks relates to them.

The Mississippi River Basin
First, just to be clear, what do we mean by “basin”? It’s an intuitive term and means pretty much what one would expect, a geographic area where all sources of water converge into a single river, like the basin of a sink. For the Midwest, there are six basins which all lead to the Gulf of Mexico. 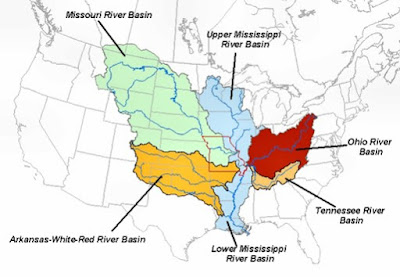 The Mississippi River Basin is probably the basin most people would recognize but it is a conglomerate of six distinct river basins from all corners of the Midwest, which incidentally the state of Missouri touches on nearly all.  This is the reason for the success of the city of St. Louis during the western expansion. The Missouri River Basin, the Upper and Lower Mississippi River Basins, the Ohio River Basin, the Tennessee River Basin, and the Arkansas-White-Red River (AWR) Basin are all part of the more generally termed Mississippi River Basin. It is an amazing system responsible for commerce and transportation critical to United States. The basin region is rich in U.S. history, has been home to ancient civilizations, and encompasses some of the oldest geologic landscapes on earth. Much has been written about the areas geography and history, both ancient and modern.

The Flooding of 2019 has been its worst in the AWR River Basin, but this is separate from the Missouri River Basin, primarily due to the elevated geography, called the Ozark Plateau, of Missouri’s Ozark Mountain region which straddles Arkansas and Missouri. The Missouri River Basin is also flooding of course but it is much larger in size, stretching all the way to Canada, and includes river flow from areas subject to snow melt from the north. Snow melt flow is typically something the AWR Basin does not contend with being in a more temperate zone.

The Army Corps of Engineers has held Truman Lake levels near record levels, almost to the top of the flood gates, this month as part of a larger strategy of the Missouri Basin. Truman is limited on the amount of water that can be released based on flow rates on the Osage and Missouri rivers, not the Lake of the Ozarks. In truth, Truman Dam can release an amount of water far greater than Bagnell Dam’s capacity to pass through.

The maximum turbine flow rate (power generation) for Truman Dam is about 65,000cfs, much more than Bagnell Dam’s approximate 42,000cfs. Its flood gates are capable of releasing water at a rate of 284,000cfs compared to Bagnell’s 220,000cfs. In short, if Truman Dam were to open all flow unchecked, it would top Bagnell Dam completely in a matter of days, if not hours, at somewhere around 670 ft above sea level. That should give everyone a little appreciation as to the reason for the 670’ easement line Ameren enforces so diligently. Is it possible Truman could ever find itself in such a situation? Not likely, but with climate predictions for the area indicating increasing rainfall over the next 50 years, it is not at all clear what the effect on the Missouri River Basin will be. 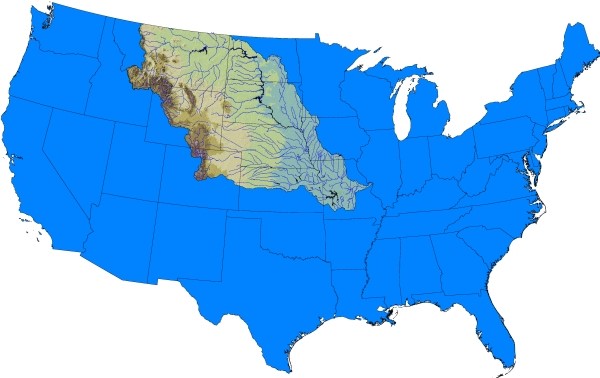 For our discussion the Missouri River and its basin are the beginning of the story. The basin is watershed to nearly one-fourth of the agricultural land of the United States and its importance to the livelihood of farmers throughout the Midwest cannot be overstated. Drought or flood, conditions along the Missouri River Basin are an integral factor of a multi-state, multi-billion-dollar agriculture industry. 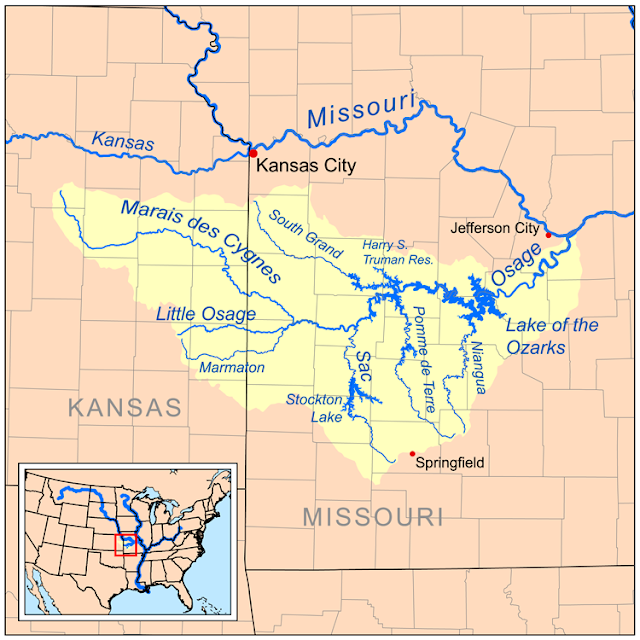 The Osage River Basin consists primarily of watershed north of the Ozark Plateau, a geographic feature of the area with relatively high elevation.  Although named the Osage well before arriving at Truman Lake, the Osage River is created mostly from the confluence of four rivers at the Truman Reservoir (Lake) which then continues through the Lake of the Ozarks. This is the primary reason for the choice for Truman Dam’s location. As the primary flood control dam for the entire basin, it was strategically located where four rivers converged, the Marais des Cygnus (French for “Marsh of Swans”), the South Grand, Pomme de Terre (French for potato, which I will leave to the reader to discover the reason for the name), and the Sac. The Marais des Cygnus has its own Corps of Engineers Dam in Osage County Kansas, built after the Great Flood of 1951. The Marais des Cygnus converges with the Little Osage River (after its convergence with the Marmaton River), in western Missouri to form the Osage River feeding into the southwest leg of Truman Lake near Osceola where it joins the Sac River coming north from Stockton Lake. The South Grand River, like others more stream than river, to the north flows into Truman Lake from the northwest. Finally, from the south Truman lake receives the Pomme de Terre river, another Corps of Engineers dammed river, to complete its reservoir. All these rivers converging in the Truman Reservoir exit through Truman Dam as the Osage River into the Lake of the Ozarks. As to how it was decided, or who decided the Osage River name would rise above all others, I can only guess. Osage was the name of the native American tribe of the region, but it is also possible the Osage River’s comparative size, being the largest of the rivers into Truman Lake that made the decision. Regardless, the Osage River is briefly impounded at The Lake of the Ozarks where its capacity is further increased primarily from the Little Niangua River (also dammed, but not for flood control, but rather hydroelectric purposes), and the Cave Spring at Hahatonka. The Osage River exits Bagnell Dam in its final form, fed only by watershed and small springs along the way to its rendezvous with the Missouri River near Bonnots Mill Missouri, just east of Jefferson City.

Truman Dam
I don’t talk about Truman Dam as much as Bagnell Dam, it's like a good child seen but not heard around these parts, but that will change a bit this year for various reasons. Not the least of which being a safety issue that has come up, but that’s another story entirely and references back to the idea there is more water and flow capacity from Truman Lake than Bagnell Dam could hope to manage in a crisis. For now, it’s important to understand that Truman Lake and Truman Dam are a vital part of the Osage River basin, and subsequently a measurable influence the Missouri River basin and the entire Mississippi basin as a whole. When it is in crisis, the operators of Bagnell Dam pay attention and do their part, as dictated by a Memorandum of Agreement, but within very strict parameters that have little impact on lakeside property.

The Lake of the Ozarks is not capable of “sharing the pain” of any major flooding to the west beyond a modest few feet. In 2015 when lake levels reached nearly 664’ above sea level it created many problems for homeowners and much uproar, but this was minor compared to what levels Truman Dam is capable of creating. When Truman Dam says they are in crisis, Lake of the Ozarks residents should pay attention.