How Safe Is the Lake of the Ozarks?

In 2016, the Lake of the Ozarks was crowned the number one recreational lake in the US according to a survey by USA Today, but there are many who believe it deserves the more dubious distinction of being the most dangerous lake in the USA(I'm looking at you Captain Malloy).  The Lake of the Ozarks has always been a very popular lake and over the years the question of how safe it is for recreational boating has been discussed many times. While there are many lakes in the midwest that share similarities, none are comparable in size and variety of boating activities as the Lake of the Ozarks. With its highly developed shoreline of private residences, public facilities, restaurants and marinas all inter-spaced across 1100 miles of shoreline, the sheer number of boats on any given weekend make accidents statistically likely. Visitors unaccustomed to such a high traffic lake see the the pounding waves, the speed and size of the boats and cannot be faulted for thinking it must be a dangerous lake.  Do the statistics bear out the notion that the Lake of the Ozarks is any more dangerous than the inland waterways of Florida, Chesapeake Bay, or one of the Great Lakes?

Every year the U.S. Coast Guard, with the cooperation of states law enforcement, collects data regarding boating accidents and provides an annual report detailing statistics for every state for the previous year. The Missouri State Water Patrol also keeps ongoing detailed boating incident reports by area and individual Missouri lakes, rivers, and streams. By first establishing the ranking of Missouri nationally in safety we can begin analyzing specific data provided by the Missouri Water Patrol to evaluate the Lake of the Ozarks in particular.

Bloggers Note: Before I continue, I feel obliged to make a statement about the subject matter and the use of statistics in such a dispassionate way.  Risk management in any endeavor, whether in regards to recreational or business activities, requires a careful study of the data, but lives are not numbers. It is not the intention of this analysis to trivialize the pain, suffering or the loss families experience from these events.

The figure below is taken from the recently released USCG report for 2016. The USCG uses a simple ratio of fatalities per 100,000 registered boats, called a "Fatality Rate", to effectively grade safety. In general, the rate in 2016 for the entire U.S. is 5.9, meaning for every 100,000 boats, nearly 6 people were killed in related incidents.  This is an 11.3% increase over last year's overall fatality rate of 5.3 despite the number of registered recreational vessels decreasing slightly.  Less vessels, more fatalities is not where the USCG would like to see these numbers going.

The chart above is a year by year summary of all boating incidents, injuries, and fatalities since 1997 for the entire U.S.. As can be seen, for the first time since 1997 the national rate actually ticked up noticeably. Since the downward trend in this time period has mostly attributed to tougher BUI/BWI laws it will be interesting to see if there is some explanation for this increase.
---
According to the report the leading causes for accidents nationally are as follows:

The above list has changed somewhat for 2016, namely weather, navigation rule violations, hazardous waters, and wave/wake force have all been added as leading causes of accidents.

Causes such as improper lookout and machinery failure still apply more to inter-coastal waterways and inland seas, like the Gulf of Mexico, where larger vessels requiring full crews are common and machinery failure can be more critical. Lose your motors on a lake and you are paddling to shore, lose your motors in the Gulf of Mexico and things get problematic fast.  The remaining causes however, operator error, excessive speed, wave/wake force, and alcohol use, are very relevant to any recreational body of water, and none more than the Lake of the Ozarks.

Keeping in mind that the fatality rate for each state is relative to the number of registered boats, the map below provides a color coded rating for each state by their fatality incidents. 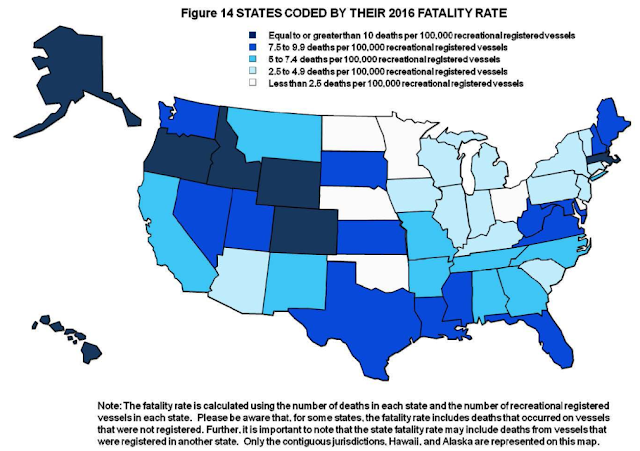 With 293,185 registered vessels in the state (575 fewer than in 2015) and 16 fatalities in 2016, Missouri's fatality rate is 5.5 (compared to 5.8 in 2015). From the above map, this rate is comparable to not just surrounding states, but lower than the rates of both Florida, and Texas, which have some of the largest number of registered vessels in the country. Missouri's fatality rate of 5.5 is for the entire state however and the question immediately arises as to whether the Lake of the Ozarks contributes a disproportionate number of accidents to this number.

NOTE: It is important to bear in mind that an accounting of the number of boats on the Lake of the Ozarks at any given time is a best guess proposition.  In winter, you will be lucky to find any boat actually on the water, while July 4th estimates have put the number at about 100,000 vessels underway. As a baseline number consider that there are over 75,000 homes along the shoreline of the lake with about 25,000 docks.  Factoring in the number of visitors to the lake, it can be estimated some 50,000 boats are on the water at any one time during the summer. This is the number that will be used for the discussion.

While information regarding boating accidents across the state are available from the Missouri Water Patrol, there is no comprehensive statewide analysis of the data. This unofficial analysis is an account of  all reported accidents at the Lake of the Ozarks from data taken by Water Patrol, along with media reports for the purpose of properly assessing death or injury as it relates to the recreational boating use of the lake. This is important, as not all fatalities are related to recreational use of the lake, some are related to swimming or other unrelated to boating mishaps. For instance, on February 12th, 2015, a woman leaped to her death from the toll bridge connecting Shawnee and Horseshoe Bend. While this had nothing to do with recreational boating use of the lake, her death was added to the list of fatalities reported by MWP on the lake because it is technically accurate that she did die as a result of falling into the lake. Her death is not one that should factor into the question of how safe the lake is for recreational boating use. With this kind of criteria in mind, for 2016 a total of 4 fatalities are recorded involving boating on the Lake of the Ozarks. This count would place the fatality rate of the lake at 8, quite a bit higher than the state average.

The perception that the Lake of the Ozarks is a particularly dangerous lake comes from both the number of reported instances, and the lake's popularity itself.  The lake's notoriety assures that the news media for Missouri's two largest metropolitan areas, Kansas City and St. Louis, are quick to report any major incidences. How many times has a death on Table Rock Lake made it to the evening news in St. Louis? But the lake's reputation is not completely undeserved either. Comparison to other lakes within Missouri such as Truman Lake or Table Rock, the intra-state data shows a high incidence of personal injury on the Lake of the Ozarks. For 2016, 51 reported injuries ranging from minor to serious due to wave impacts, collisions, or operator error and are often attributable to the unique conditions of the lake. The Lake of the Ozarks is a large lake, and along with consistent depth and predictable shoreline, it is a popular home for boaters with large boats. On a busy weekend these boats in combination can generate waves normally only seen on larger more open bodies of water. No other lake in Missouri records so many incidences of injury due to water conditions, and although these numbers are based on reported incidences, most everyone who has boated on the Lake for any length of time has a tale or two of injury regarding wave impacts, some minor, some not so minor. Nearly everyone in my family can point to at least a scar or two, or worse. Most boaters take injuries in stride, but if someone is injured in your boat severely enough, you are required to report it. Just last year, local legislators along with area stakeholders made an attempt to develop legislation to contend with rough water issues, but efforts have gone nowhere.

The Lake of the Ozarks, from fall to early spring, is like any other Missouri lake for water conditions, but in summertime it becomes somewhat bipolar in nature. During the weekdays it is often calm enough for activities such as water skiing, and smaller boats less than 30ft can make speed comfortably, but on summer weekends it is a stark contrast to these conditions. High wave conditions are not in themselves terribly dangerous, the danger comes in not having the proper vessel or being prepared to navigate in these conditions. The Lake of the Ozarks can be safely navigated at any time if boaters maintain an awareness of the conditions, and not to underestimate them. Recall, the top two causes for accidents cited by the US Coast Guard report, operator inattention and operator inexperience. These two factors can be especially dangerous on a lake as congested as the Lake of the Ozarks.

Ultimately, boating safety relies on the people, their experience, boat handling skills, and preparation, but just as importantly is a commitment to safety.  Boating is a wonderful recreation and the Lake of the Ozarks is the best lake in the world to enjoy it on.  Any safety challenges its popularity presents are manageable and the experience is well worth the effort.

The strategies for boating safely on the Lake of the Ozarks are really no different than any other body of water, only the margin for error is sometimes smaller. Wind can whip any lake into frenzy, but on busy weekends large boats on the Lake of the Ozarks can create waves 2-3 feet from trough to peak and these waves bouncing between shorelines like a bathtub create a superposition effect where wave piles upon wave, intensifying already rough conditions.  Navigating a small watercraft through a relentless series of waves of this size is challenging and sometimes beyond the experience of many boaters, especially visitors accustomed to smaller, less congested lakes in the Midwest.

The Lake of the Ozarks is Missouri's premier boating destination and for good reason, but it's popularity demands boaters be attentive to the special conditions that arise in order to boat safely. With knowledge, preparation, and vigilance, boating on the Lake can be a safe and wonderful experience on any given weekend.