Apparently this bill has been referred to the Public Safety and Emergency Preparedness Committee in the house where it will likely die a slow and uneventful death.  There are no scheduled hearings for this committee during this session. 5/17/2016

The lake's activities sometimes catch the attention of the public and, therefore, public officials, but rarely can a law or regulation solve a problem like this, and certainly not without unintended consequences. Remember in 1997 when Party Cove got a little too much attention in the media from angry residents in the newly developed Shawnee Bend area and suddenly there was an idea proposed to restrict the number of boats that could tie up together?  Boaters were completely unsupportive of this idea and the next year, everyone started going to Anderson Cove in the State Park for their party coving needs and the proposed regulation was never pursued, gratefully.

I'd like to think the boating community could solve this problem on their own as well, but the wake issue is different from the problem with Party Cove, it's more lake-wide in scope and effect.  The idea for these new regulations is simply the expected response from our representatives who feel they must do something, and to be fair they have; the public had the opportunity to make comment, propose ideas, now there is a bill, and it could be signed into law. Representative Wood has done his job, but that's only the beginning. Nothing will change unless we, the people, decide it's important enough to pass new restrictions and apply the pressure needed to make it happen. Could it pass, as is, without more vocal public support? Possibly, but not likely given where it stands on the agenda. The house and senate have other initiatives they feel are more important. It is after all an election year, but never forget, legislators don't like messing around with laws that directly impact the financial golden goose that is the Lake of the Ozarks unless they have too.

It may well be that people want more stringent regulations when it comes to boating in Missouri, and although I doubt it would be effective, let us not be disingenuous to Representative Wood's efforts. His bill could be the answer, there are parts of it I think could help, but it will need full hearings to be perfected.  If others feel this bill could solve the wake issue, and they can live with the consequences, than they should get organized and start supporting it.  Otherwise it's easy to see it going nowhere.

It's our choice citizens. 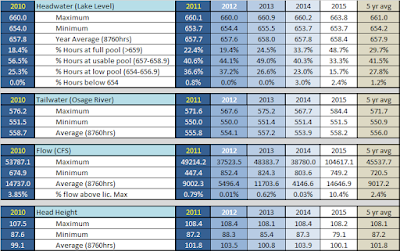 Lake of the Ozarks Climate Summary - 2015 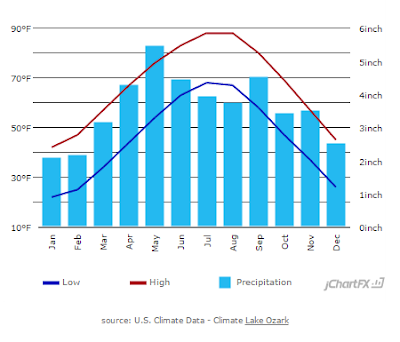 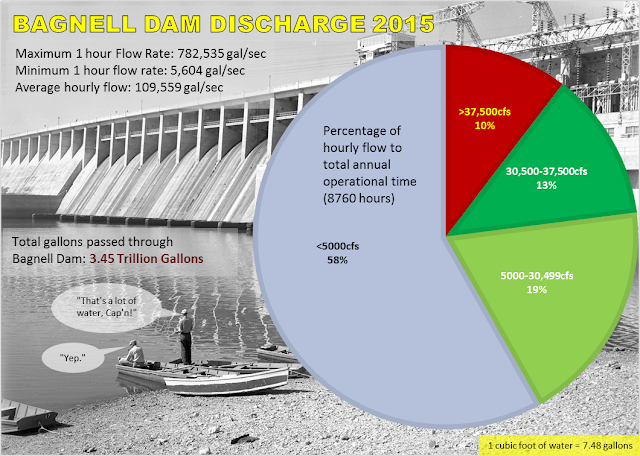 It was a historic year for Lake of the Ozarks when it comes to lake levels and flow.  Two flooding events, one in July, the other in December, pushed the lake to levels not seen in decades.  The difference between the lowest level of the year and the highest was over 10ft!

Even from just the thumbnail image below, we can see the standout times when levels and flow were at their extremes.

Click here for the original drawing to see details.

Here are some highlights of the numbers.

Maximum Discharge: 104,617.10 cubic feet per second(cfs) on December 28th at 6pm, representing half of the dams flood control capacity.  This is nearly 3 times the maximum flow of 2014.

Total outflow from the Lake in 2015: approximately 462 billion cubic feet, or three and a half TRILLION gallons, flowing from the lake into the Osage River over the course of 365 days.

Lake levels started normal enough at the beginning of the month but, as everyone is aware, finished in the record books.

Next post will be the full lake level year in review!
at 4:49 PM