What's so special about the Lake that it is spared the ravages of flooding while the Osage and Missouri Rivers flood and Truman Lake is busting at the seams?

With the 30 day outlook calling for a wetter than normal June, things may not improve much.

The answer as to why the Lake of the Ozarks seems out of step with other bodies of water in the area is not a simple one, but it is important. It has everything to do with the very different purposes for which the two dams, Truman and Bagnell were built, who controls them, and the river basins they serve. I've spent a little time explaining it here if you're interested.
at 2:00 PM

A very unremarkable April chart for a change. Usually spring rains bring dramatic changes in lake levels during April but it waited until the last minute this year when it went out with a bang. The lake rose over 1 foot in 24 hours on April 30 due to stormy weather. A surprisingly steady flow over 15,000cfs throughout the month. 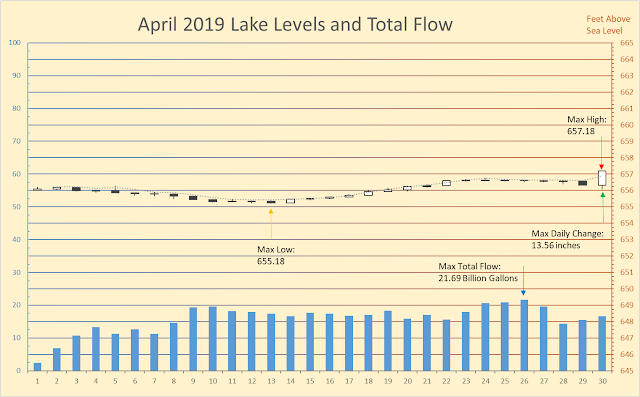 And the detailed chart below. 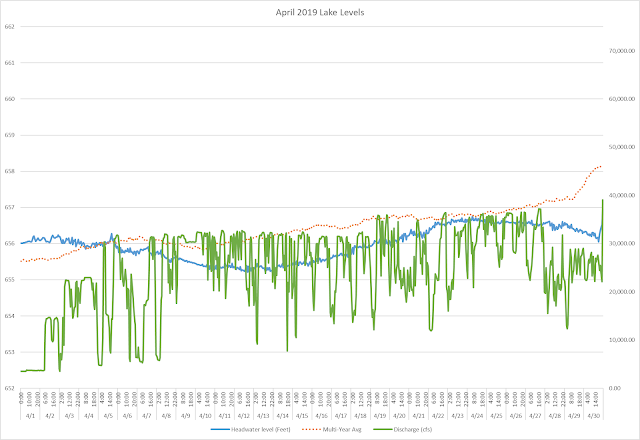 It would seem the time is here. It was inevitable that someone would try to design, produce, and sell an all electric wet-bike and the electric vehicle company Nikola has done it. At lest to the point where you can get on a waiting list (for free no less!)


Nikola (as in Nikola Tesla, but not as in Tesla vehicles) has been making ATV style electric vehicles for some time with promise that a water sport vehicle was coming. Well, it's here. There are a lot of questions I have as an armchair boat designer and engineer, not the least of which is how do make an all electric power plant safe in the water, but for now, let's see what Nikola is saying about their new toy.

Not much. But on my concerns about safety, Nikola seems to be touting the IP68 standard of waterproofing. This waterproofing standard is not really made for things like wetbikes, but more for small devices like mobile phones and requires a device be able to handle being fully immersed in up to 1.5m (a smidgen under 5 feet) of water. So the Wav is rated about the same as your Galaxy S10 for operation under water. Of course, that's just fine for the occasional roll-over and usage and I'm guessing that Nikola is banking on their design never sinking below the waterline.

Another point feature is "Instant Torque". That's an interesting angle. Instant torque is a feature of all electric motors. In actuality all electric motors exhibit maximum torque at zero velocity (which is why train locomotives tend to use electric motors powered by generators driven by diesel engines). So I suppose it's reasonable to equate that to "instant". But what does that mean for the performance of the wetbike? Answer: That depends. There's nothing inherently performance enhancing about having maximum available torque at the prop (or impeller in this case). It's can be an advantage, but many other factors would need to be examined in the design of the propulsion to determine any specific performance boost. But that's a completely different discussion.

The Wav apparently goes full digital for display with a twelve inch 4K dashboard but from the image below it looks like you could watch a movie or something. 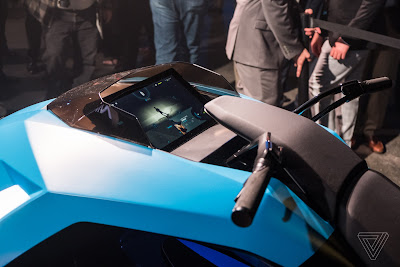 And then there's my favorite, the front LED headlamp (not a bad idea), and the rear taillights. Taillights? Do they work like brake lights or somethings?

There are no other details regarding performance, run time, charge time or pricing at this time.

But you say hey! Why so snarky? I mean these guys are doing it aren't they? Sure, but I think you're going to have to bring a lot more to the table then just an electric power plant, better storage and a curious hull, to get people to buy these things. Take a lesson from Tesla, Nikola. Early adopters want a compelling reason to go electric. Elon Musk gave them super-cruise and auto-pilot with brain melting performance. What does the Wav provide but novelty and dubious performance enhancements? I wish them luck though, I really do, but the consumer is king on this battlefield.