In summary, some 133 incidents were reported last year and one breakdown is to look at the numbers by severity.

2016 didn’t start off well for boating and injury incidents on the lake, with the first fatality in January during and unseasonably warm weekend. The final breakdown of incidents for the year by description is as follows:

From a "Fatality Rate" point of view, which is what next month's U.S.Coast Guard report for 2016 will focus on, the Lake of the Ozarks remains unchanged from 2015 with 8 fatalities and likely within the average for the entire state.

It may be possible to analyze this data into more meaningful risk assessments but would need to be looked at on an incident by incident basis for extenuating circumstances such as time of day. Incidents involving "fixed objects" is a top category, but what were the objects? No wake buoys? Docks?  Hit a no wake buoy and you might throw an outdrive, but hit a dock and serious damage and injury is likely.

As time goes on I'll keep these reports and start tracking them. With this kind of data we can begin to track trends, but at this time I see nothing to indicate the lake has become more, or less, dangerous than it has been in years past.  As the 2017 season begins in earnest, here's hoping that everyone has a safe and fun summer! 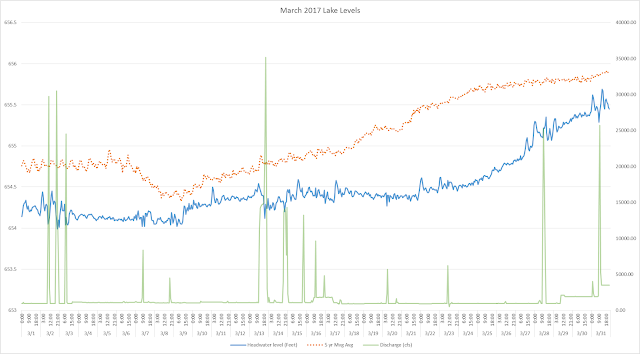 Lake levels began rising on March 9th towards full pool by Memorial Weekend. March levels started low and remain about a half a foot under the five year moving average (in orange). Very modest power generation and days of rain should help bring the lake to normal conditions without difficulty. Summer is coming!
at 11:05 AM