Kayaking on Lake of the Ozarks

It's funny that I've never put up a post about kayaking on the Lake of the Ozarks because it's become one of my favorite activities on the lake. Judging by the proliferation of kayaks just in my cove alone, it appears I'm not the only one.

Modern kayaks are amazingly simple watercraft. Typically vacuumed formed out of a single piece of poly-carbonate plastic, the same stuff used to make trashcans. They are relatively light, tough as hell, and require very little maintenance, and the best part is, the motor is (usually) very reliable! Usually I say, because failures have been known to happen!

There are two basic styles of kayak the sit-top and the cockpit style. Sit-tops are more recreational and also tend to be the style of choice for fisherman. The cockpit style is one where you slip into the body cavity of the kayak itself. In this category there is a full spectrum of types ranging from the long slender "sea-kayaks" at one end of the scale, to the short white water style on the other.

I have a Perception Carolina, which is considered a touring kayak which are on the the sea-kayak range of style, typically anything over 11 feet long.


I've had my kayak for more than 10 years now, a 14.2 foot Carolina, made by Perception. I've taken it to the ocean and on just about every river in Missouri, including the Osage. At the lake I've probably spent more hours in it than I have my 27ft Sea Ray in the past ten years. I can only guess how many miles I've paddled but I know it's in the hundreds.

When the lake flooded July 4th, 2015 I was able to paddle out to the main channel. Not a boat in sight.

Paddling around in the winter time is some of the best kayaking, but be safe! I have a life jacket on at all times when paddling in the winter! 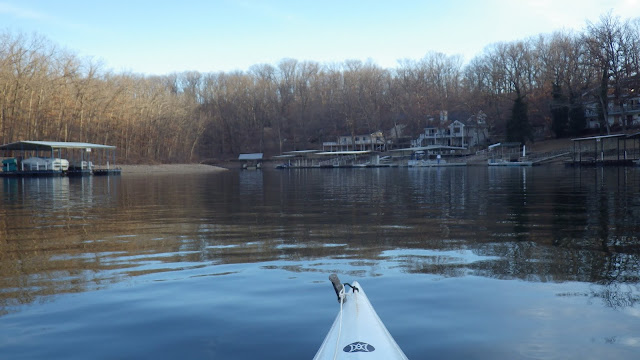 One of the cool things about a kayak is being able to sneak up on wildlife, which is not always a great idea. Startled deer do funny things.

One of my favorite things to do in the kayak is fish of course. The Carolina does fine fishing, but as I said there are kayaks made specifically for fishing, and if that's your thing, I would recommend you take a look at them over a touring kayak such as mine.

Some tips when it comes to paddling on the Lake of the Ozarks.

Don't stray too far from docks and shoreline, especially on weekends. There's far too much boat traffic to be safe in a kayak in open water. Try to be in a position to duck beside a dock in quick order if a boat doesn't seem to see you. You're too low to the water in a kayak to be easily seen. Of course, the back of a cove or in no-wake zone is relatively safe, but you should always keep an eye out for power boats and PWCs.

Let people know where you're going and how long you expect to be gone if you plan on being out of site of your home dock. People worry.

You are required to have a life jacket with you, on is optional, but it would be wise.

Buddy up if you can. I personally kayak alone quite a bit (me time), but it is more fun with a companion.

Teach your children how to kayak. I have never met a child that didn't enjoy being in a kayak. There's something empowering about it to them. I suppose it's the first serious mode of transportation that they are in charge of maybe, but kids in the cockpit with you will enjoy it as well. If they can fit. My granddaughter is about 60lbs and she's only now getting too big to sit in front of me and leave me room to paddle. But now she's old enough to paddle her own kayak! My four year old grandson fits just fine still. I've taught all of my nieces, nephews and friends to kayak and by far they are the most popular water toys we have.

Don't tease the people on paddle-boards by doing circles around them. A stand up paddle-board (SUP) is fine, but I like to make way on the water even if it's under my own power. SUP's are slow, difficult to maneuver and not very versatile, but to each their own.

I could go on and on bragging about how much joy that little boat has brought me over the years. The stories I could tell. I've truly had some amazing experiences. If you think it might be something for you, I would encourage looking for something used first. A lot of people buy them, use them briefly and decide it's not for them. You can usually pick up a very "low hour" kayak if you just keep an eye out or tell people you're looking.

It Was the Boat! 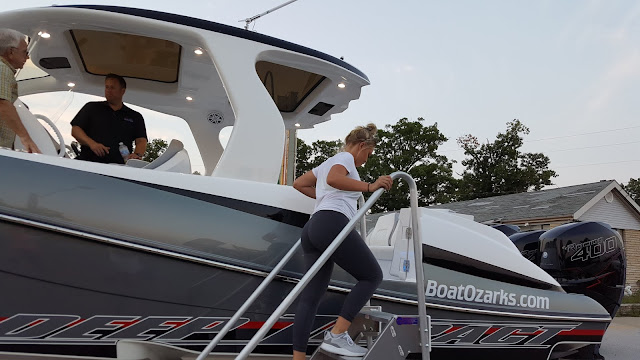 This is from the Parade of Boats 2017 on Bagnell Dam. This is a beautiful console boat, called Deep Impact. I believe it is for sale.

I usually save the following graphic for the end of the year, but the total amount of water that has passed through Bagnell Dam so far has been unprecedented in the time I've been keeping track of it. 3 of the 12 flood gates continue to remain partially open keeping flow rates just above 50,000 cubic feet per second (cfs). This means for the month of July 981 BILLION gallons of water flowed through the lake into the Osage River valley below. For the year, 3.7 TRILLION gallons have already passed, and the gates remain open.

For perspective, more water has already flowed through than all of 2015 when the lake flooded...twice. The year of the no wake 4th of July the total flow for Bagnell was 3.45 trillion gallons, which we have already exceeded. The Osage River Basin below Bagnell has been scoured.

Anyways, it's an impressive amount of water, so I've done a mid-year info-graphic for perspective. Again, this is just for the first 7 months, we have a lot more water to go until the end of the year. 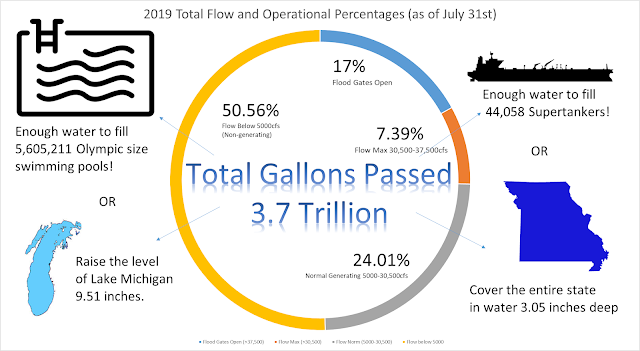 And the full hourly detail.

And the monthly summary for the year so far. Notice that the total flow bar is nearly at the top of the graph. I've created this scale to this extreme high of 1000 billion based on the events of 2015. I didn't think we'd hit it again so soon. Just...wow. 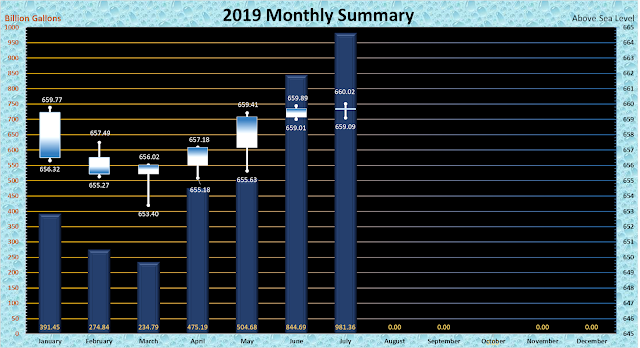