Mountain Lions at the Lake?

It's no secret that Mountain Lions (aka cougar or puma) are returning to Missouri. Since 1994 the Missouri Department of Conservation (MDC) has had a task force in place to investigate all big cat sightings.  To date, there have been sixty confirmed sightings of the mountain lions in Missouri, mostly in the southern half of the state.  The most recent was in February of 2016 in Shannon county where sightings of cougars, along with black bear, have become common around the Current and Jacks Fork rivers.

In an earlier sighting in January, an automated game camera took a picture of a cougar in a county that hits a little closer to home, Henry county.  Henry county is one of the counties that includes parts of Truman Lake.  This cougar was apparently photographed near the Henry-St.Clair county border very close to the lake itself. (April 2016 Update - the carcass of a mountain lion was discovered along the shoreline of Truman Lake about 10 miles southeast from this sighting and very likely the same animal). 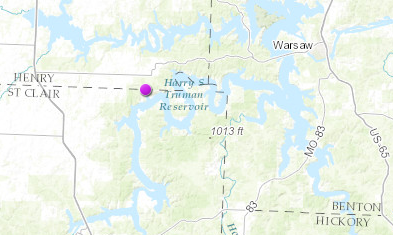 A less recent but even more relevant sighting in October of 2015, again confirmed by MDC, occurred in Miller county, along the Osage river.  This cat is well within range of the Lake of the Ozarks and more importantly Missouri's largest state park, but if the map provided by MDC is accurate the cougar is on the wrong side of the river to make it easily to the lake area. In order to reach the lake it has only two paths. The first assumes it survives crossing Hwy 54 to make it to the north side of the lake around the Gravois arm. While there is some habitat in that area, I do not think the animal would find it desirable to stay. What would be a desirable location is the Lake of the Ozarks State Park, but in order to reach this area, it would have to cross the Osage River at some point. I've kayaked down the Osage River from Bagnell Dam all the way to St.Thomas and can say that crossing the river, especially when it is low is possible in many locations. Besides, I think they can swim. 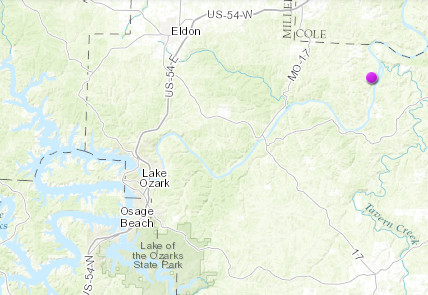 Prior to these two sighting the nearest sighting was in Pulaski county in the Summer of 2013.

While it's apparent mountain lions are returning to the area I don't believe there is cause for concern. There is plenty of game to keep them satisfied in the areas they have been spotted and the lake itself is active enough to discourage any large predator from sticking around. Having said that, I assure you that the next time I'm camping in southeast missouri I won't just be keeping an eye out for bear.
at 3:28 PM