By now, many have heard that Ameren will be investing $52 million dollars in upgrades to Bagnell Dam, but what exactly are they going to do?  Is the dam broken?

No, Bagnell Dam is not broken, or structurally deficient, but it could probably use a little work.  The last time Bagnell Dam had a major structural upgrade was in 1980 when 277 post-tension anchors were installed to secure the dam to the underlying bedrock.  Recall that Bagnell Dam is what is known as a gravity dam, meaning it is held in place by sheer weight. While this is a perfectly acceptable design methodology there are potential issues to contend with and the anchors set in 1980 were installed to insure the dam would not move from its position over time.

Ameren will be installing 68 more anchors along with additional concrete to reinforce the roadway deck from underneath, and also repair the top roadway deck itself.  The top deck work is more cosmetic than structural, but as anyone who drives across the dam on a regular basis knows, it looks bad. The condition of the roadway concrete gives the impression that the dam is in disrepair, appearances being what they are.

So what is a "post-tension anchor"?  How does it work to keep a dam in place?

Post-tension anchors, conceptually, are quite simple.  Bore holes are drilled through the dam and into the underlying bedrock with a tension cable running through the entire thing.  Once properly anchored, the cable is tightened, much like a giant bolt, to provide additional frictional force between the dam and the bedrock.  Simple, but as with all things, the devil is in the details. 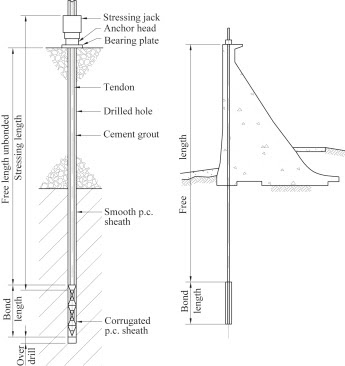 Ameren won't say why the additional anchors are needed, there are many reasons to install such devices in dams, but the overall goal is strengthening.  The reasons for strengthening an existing dam vary but the two main ones are to meet new safety regulations or increasing a dam's water storage capacity.  Both of these reasons are unlikely since Bagnell Dam just went through a relicensing process which required extensive analysis of its condition, and Ameren cannot raise the operating level of the lake.  Is there any other reason for these anchors? Another possibility is the anchors provide additional structural strength for increased spillway capacity.  Given recent flood events in 2015 which resulted in extended periods of operations where flood gates were operated, Ameren may have discovered a vulnerability.  There is also the possibility that the anchors installed in the 80s may have issues with corrosion, a common problem with post-tension anchors. Any time you sink metal into wet bedrock, corrosion is a primary concern and some dams with these structures have had issues.

Regardless of the motivation, the addition of the anchors will simply help insure the dam is around for a long time.  The work is expected to take 18 months with no disruption to electrical generation, the impact on traffic flow however is unclear.

For those interested in the engineering details of all this, here's a link.
at 9:26 AM