“The Lake of the Ozarks is one of the most dangerous bodies of water in the United States according to Coast Guard boating statistics..."  - Captain Martin L. Malloy UMR Sector Commander, U.S.C.G as reported on LakeExpo.com June 20th, 2017

The article I'm referring to above showed up on LakeExpo.com on June 20th, breathlessly reported over the presence of the U.S. Coast Guard on the Lake of the Ozarks last weekend.  While I have no beef with LakeExpo in particular, I'm a little peeved at the contents of the article. Lake Expo has, as others have done in the past, promoted the idea that the U.S. Coast Guard has jurisdiction on the Lake of the Ozarks because it is considered a "navigable" waterway.

2018 UPDATE:  I've recently had a very nice conversation with the Public Affairs Office of the U.S.C.G regarding their jurisdiction on the Lake of the Ozarks. It would seem, my opinion is in error as far as they are officially concerned and that they indeed have complete authority on the lake as a law enforcement agency.  Which raises many questions. I'll be posting about this conversation and the reasoning behind their position regarding jurisdiction and authority soon and provide a link here.

The Lake of the Ozarks is NOT considered a "navigable" body of water. Although it meets the common sense notion of what a navigable body of water is (in fact it's extremely navigable!), the label "navigable" is assigned to waterways by the U.S. Congress under its commerce powers, and thus determines which federal agency has maritime authority over it. But I've discussed this all before while this line of crap continues to be used to justify the presence of the Coast Guard on the lake. The Coast Guard's enforcement authority is very limited here.  This is why there's usually a Missouri State Water Patrol boat right along side of them to do any real law enforcement. The MSWP is THE primary law enforcement authority on the Lake of the Ozarks. The Coast Guard doesn't show up periodically just to make sure they're doing a swell job enforcing laws.

But the real reason for this particular rant is what the commander of the Upper Mississippi River Sector was quoted saying about the Lake of the Ozarks, “The Lake of the Ozarks is one of the most dangerous bodies of water in the United States according to Coast Guard boating statistics."

If Lake Expo has accurately quoted Captain Malloy, then he's not reading his own reports. Yeah, this guy.  I'm sure he's a nice guy and all, but he needs to read his own damn reports. 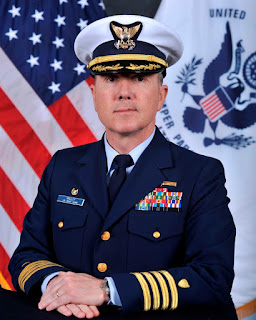 I assume Malloy is citing the annual Coast Guard Recreational Boating Statistics report as the source of his assessment, but this report has never supported such a dubious claim. Granted, the report is at the state level and does not single out specific waterways, but I've been analyzing this report and it's relation to Water Patrol reported accidents on the Lake of the Ozarks for many years now, going back to 2004. While stories abound of injury or even death in the media, there is no statistical evidence to indicate the lake is any more (or less for that matter) dangerous than any other body of water in Missouri. You can read my analysis with a link to the latest CG report for yourself here.  Maybe my analysis is wrong, some assumptions must be made, but there is nothing in the report that points here saying, "Yep, that's a fairly dangerous lake you got there!".

I'm a Coast Guard veteran, and proud to have served, so I have no ax to grind with the Coast Guard (okay maybe with officer types since I was enlisted) but this nonsense needs to stop. Captain Malloy's comment is inaccurate and possibly self aggrandizing. The popularity of the Lake of the Ozarks is only growing and that guarantees a lot of press when bad things do happen, but to get an official statement from the sector commander of the Coast Guard that it is one of the most dangerous lakes in the country is either willfully ignorant, or a thinly veiled attempt to promote Coast Guard presence in the area.  Let's be clear, the Coast Guard is not relevant on the Lake of the Ozarks except to promote safety, affirm proper vessel documentation (Coast Guard registered vessels only!), and help herd boats during firework displays and racing events.  Their resources are better spent on other waterways where their law enforcement authority has real teeth, rather than trying to look like the big dog pissing in the tall weeds in our backyard.
at 2:10 PM