March 15th -. I could easily be jumping the gun here, but I'm going  to go out on a limb and say we hit the draw down peak yesterday around 9am with a low of 654.30.  With discharge flow dropping below 4,000cfs it appears Ameren is content to let whatever rain occurs in the next 72 hours to accumulate and mild temperatures means there's no real demand for power generation. With all that in mind, and given we are nearly two weeks past the average peak low date, I'm pretty confident lake levels will begin the slow and steady rise toward spring numbers.

Below is the 9 year chart of lake levels for the period January-April. Yes, I know It's only March 15th and things could change, but I was kind of anxious to get this post done. No, that's no glitch in the data on the far right. The lake rose over four feet in about 36 hours last year.

Update = I've got a jump on the chart for March here

The chart, with nine years of data it's getting difficult to keep neat. Here's how to read it. The current levels for this year are in red, while the nine year average is in bold green.  The previous years are in various shades of grey starting with black for last year fading with each successive year further back in time.

March 27th update below - Nope. I didn't call it.  Lake levels have dropped since the last update to it's lowest level of the year, 653.91 at 8am this morning. It's come up slightly since then but I won't venture to think we've hit the low.  I swear, sometimes I think Ameren reads this blog and adjusts levels just to prove me wrong.  ;-) As you can see, we're just about to match the latest date for reaching low level in the past 9 years which happened March 31st, 2011.

Final Update: Given the low levels late in the year for 2018 I decided just to wait until May 1st before a final update. The maximum drawdown level for 2018 came on March 27th at 653.91. A very typical peak low level.  Nine year data average for date and level is now March 11th, at an average level of 654.82. 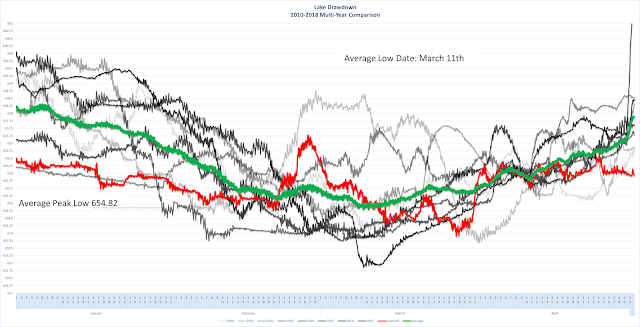 Below is a simple graph of just 9 year hourly levels average. (= Green graph above) 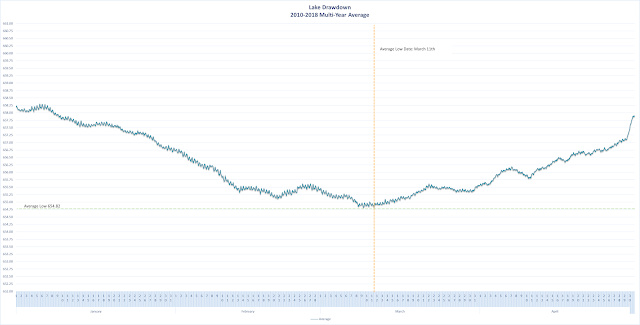