How Expensive Are Homes on the Lake of the Ozarks?

From Redbook Magazine Online here are the top most expensive lakes to live on in the U.S. (from lowest to highest)

Anyone who has visited the Lake of the Ozarks is typically amazed at the number of homes along its vast shoreline. Visitors thoughts inevitably turn too wondering just how much it costs to buy a home here, or if it might be a good investment. For the most part, home investments on the lake are like anywhere else, but with an interesting twist on the old location-location-location rule. The primary location factor for a lake home is of course waterfront. As the decades have passed since the lake was formed lake property has gone through many changes, campgrounds of the 50s and 60s soon succumbed to condominiums and homes, while larger lots with modest summer cabins became full sized second homes in the 80s and 90s. Shawnee Bend, once mostly pristine forested shoreline became an opportunity to build entire communities once the new bridge made access more reasonable from the east side. Because of these often slow but sometimes rapid changes it's not unusual to see homes approaching the seven figure mark adjacent to a home half the price. With some area exceptions such as Shawnee Bend shoreline homes are usually a mix of homes ranging from summer cabins to multi-family "McMansions".

When it comes to lake homes, the waterfront is every bit as much of a factor to price as the home itself.

Are lakefront homes on the Lake of the Ozarks "expensive" relative to other lakes in the U.S.? The story mentioned at the start of this post was picked up by Redbook magazine and MSN, but I was a little dismayed to not see the Lake of the Ozarks on the list. I know many lakes across the country, and there is no question that the Lake of the Ozarks is the most developed I know of, so how could it not make the list? We all marvel at many of the homes on the lake and the clear opulence they demonstrate, so the report would seem to indicate there are lakes that command even higher prices? After some quick digging I discovered the source of the article's information and downloaded the entire report. Turns out, "most expensive" is literally what was meant by the news articles, but that is not the whole story and the report from which the list was created is far more interesting in detail..

But first, back to that list of the most expensive lakes in the U.S.. If we define most expensive as being average price, the Lake of the Ozarks doesn't make the cut. Sure, we have multi-million dollar homes but only about 1% of Lake of the Ozarks homes are valued at $2 million or more. This is in comparison to the most expensive lake, Butler Lake in Florida, with 50% of its homes priced at +$2Million. But again, that doesn't tell the whole story since this list does not factor the number of homes on any given lake. Consider that if there is a small lake with a few multi-million dollar homes then it can likely boast at being THE most expensive lake to live on. What is the real question we should be asking? Real estate is very much a supply and demand industry and any lake with only a few homes to sell is quite a different market than one with many thousands. As an investment, in order to understand the value of a home we must take a look at the lake's total market value, the combined total of all the homes and property on a lake.

So let's take a look at the numbers for lakes within the state of Missouri itself. When we ask the question all over again as to which lake is the most expensive, the Lake of the Ozarks comes in second with an average home price of $363K compared to Lake Springfield's average of $475K. Again though, the number of homes is a factor as the Lake of the Ozarks dominates as the largest home and property market of all the lakes in Missouri, with Lake Springfield not even making the top 5 in total market value despite it's "most expensive" status.

Here's a breakdown of the housing market for the three largest lake home markets in the state. 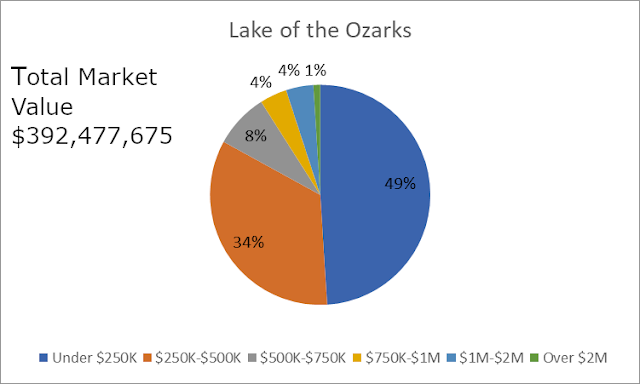 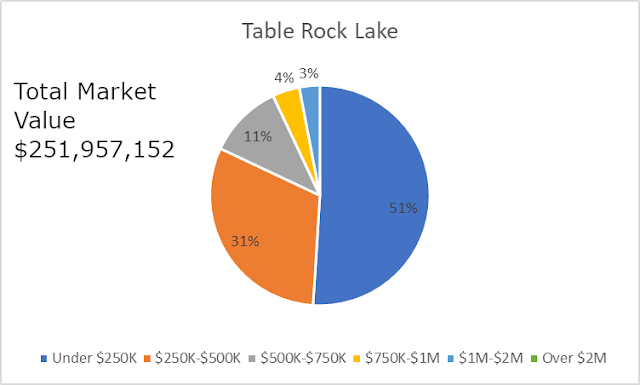 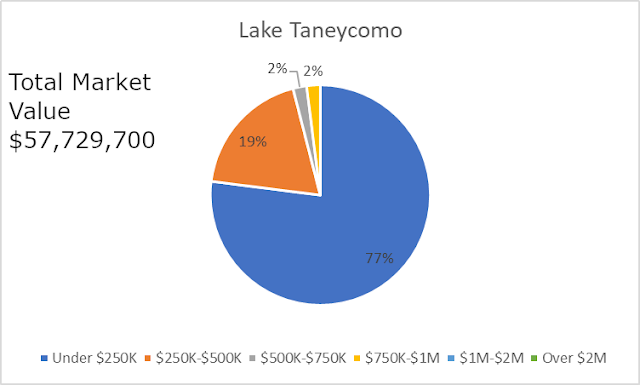 The Lake of the Ozarks cannot boast being the most expensive lake in the U.S. but that is a good thing in my opinion from a real estate investment point of view. Our lake can boast a healthy variety of homes and prices to make for a vibrant market and cater to just about anyone's price range. Like any real estate purchase a persons specific needs are what is important and whether it be a condominium, summer cabin, second home, or retirement McMansion, buyers can find just about anything they need.