For years I’ve been providing a monthly graph of lake levels and flow rates for the Lake of the Ozarks and while I’ve done this mostly for my own amusement, I have hoped they, along with some multi-year analysis, would provide some insight into the relationship between Ameren’s operation of Bagnell Dam and the conditions of the lake. The graphs I’ve provided in the past looked something like this: (I’m using December 2015 for dramatic effect)

The graph does a nice job of showing lake levels in hourly increments compared to the five year average, as well as the amount of flow, but I have always found it to be overly detailed.  After all, most of us only make note when lake level changes of more than a few inches happen. Day to day changes rarely get noticed so a graph of hourly levels for the entire month just creates a lot of visual noise.  There had to be a  way of visually graphing these levels compared to flow in a more meaningful manner. It occurred to me one day that the relationship between lake level and flow was very similar to the relationship between stock prices and trading volume. A popular charting method for stocks is called a candlestick chart and most spreadsheet software have them available. After re-arranging the data, I was able to produce a simpler graph. Below is a candlestick chart of the same data used above:

Obviously the candlestick version is much different than before, introducing new visual elements but it is simpler, and actually provides better information. The older charts are rather raw in the sense they track instantaneous numbers whereas the candlestick version is better at summarizing trends. There are cosmetic differences as well, the lake level and flow rate indices are on opposite sides now with lake levels on the right, and flow on the left, but an important difference in the flow index is the measurement. The old chart showed flow in cubic feet per second but the new chart  measures total volume of water passed for the day. Since this new measurement is a total amount rather than a rate, and in gallons instead of cubic feet, the number index is markedly different, measuring in the tens of billions of gallons.  The dotted orange line interlaced in the candlestick elements is a 2-day moving average based on end of day lake levels.


We’ll be looking at each graph index in more detail but first lets address the most important element of the chart, the candlestick. What do they mean? And how do the show lake level? They are actually quite simple.

For our purposes of tracking lake levels, the body ranges the starting and ending levels for the day. Unlike stocks, whose price may go up or down in the overnight after hours, the lake levels are continuous hourly measurements and the level recorded at midnight is the end point of yesterday and the starting point of today. In that respect the candlestick body will always line up at the high or low end to the next and previous days high or low end.

The color of the candlestick is a visual indication of whether or not the lake ended higher or lower than it's start, but not necessarily it's highest or lowest point of the day. The highest and lowest levels are indicated by the "wicks" on top and bottom. If the body of the candlestick is white this indicates a rising level and the bottom of the body shows that starting level of the day while the top its ending level. If the body is black, this is reversed and the the top of the body indicates the starting level while the bottom it's ending level. The figure below makes this easier to see. 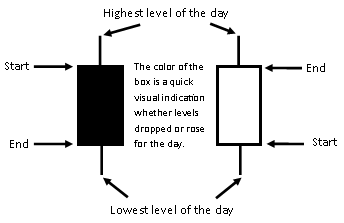 As you'll see from the graphs, sometimes a candlestick has only one wick, or the body is small if not non-existent at all. In the case of the small candlestick body (almost a horizontal line), this simply means that lake levels ended on or about where they started for the day. For a single wick candlestick, the implications are just as simple, but best explained by example. 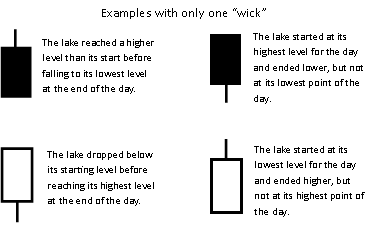 Put it all together and here's what it looks like. Below is just a few days worth of lake level data, plotted as a candlestick chart. 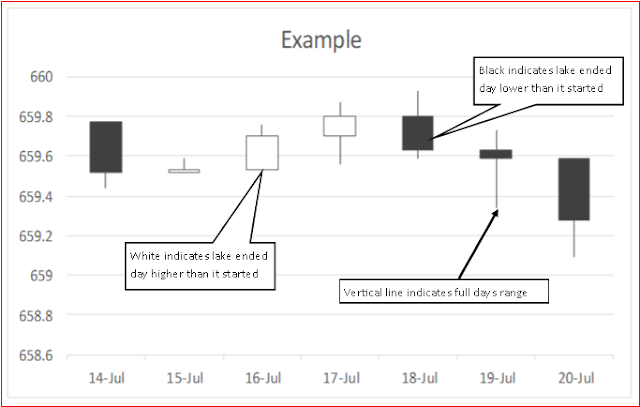 Ameren measures the total flow through Bagnell dam in cubic-feet-per second. In simplest terms this is the amount of water that would fill a cube 12 inches on each side (a volume equivalent to about 7.48 gallons). Measured per second merely means a cubic foot of water flowing past a fixed point every second. This flow rate, depending on conditions, can be anywhere from 500 to 220,000 cubic-feet-per-sec (cfs), but this unit of measure is not very intuitive for folks used to thinking of water in terms of gallons. The difficulty of graphing this flow rate is to do so in a visually meaningful way using some kind of relatable unit of measure. For a daily summary candlestick graph, we use the total volume of water passing through Bagnell Dam in a one day period as the “volume” data. This is a reasonable approach and meaningful since, as with the price of stocks, the lake level is a function of the volume of water passed through the dam (but as with stocks not the only factor!).  In order to get this total volume number we must take the hourly flow rate provided by Ameren in cubic feet per second and convert it into a sum of cubic feet per day, and further convert into gallons. These multiple conversion factors take an already large number in the tens of thousands and raises it to billions. The total volume of water for a modest day is about 4 billion gallons and can easily reach tens of billions during heavier flow.  This total daily flow is represented by the blue bars in the graph and its height as indexed on the left of the chart. Each small tick mark indicates 2.5 billion gallon increments.

While a  billion gallons is a fairly difficult concept to get one’s head around we can use the lakes total capacity of about 667 billion gallons as a reference to help gain some perspective.  For instance, on Dec 28th 2015, the total volume of water passed for the day was about 64 billion gallons, but it may more easily be thought of as about 10% of the lakes total volume. Anyone familiar with the size of the Lake of the Ozarks can appreciate that represents a remarkable amount of water.

Unlike lake levels, there is no guide for flow rates, there is only a minimum and maximum. The minimum is set by regulation to maintain proper health of the Osage river, but typically the least amount of hourly flow is about 900cfs, or about 10,000cfs per day. Maximum flow is dictated by the maximum capacity of Bagnell Dams turbines and flood gates. During the flood of 1943, arguably the greatest test of Bagnell Dam’s flow capacity, an estimated 220,000cfs was being passed. Given the descriptions of the event this probably represents the dam’s maximum. For comparison the December 2015 maximum flow was only 104,000 cfs, less than half of that in 1943.

Why use such a high range for lake levels. isn’t the lake kept fairly constant? Compared to Corps of Engineers lakes, the Lake of the Ozarks does maintain a relatively predictable lake level –based on season. As  you can see however, from the official Ameren Guide Curve below (figure 5), the “operational” range is 15 feet (645-665), but the lake can go even lower. In theory, there is no lower limit to lake levels, the lake could be emptied and revert to its original river characteristic without any effect to Bagnell Dam other than an inability to produce power. This will never happen but the lowest level ever recorded was 639.95. There is an upper limit of course being the physical height of the dam itself, but that level is a bit more than 665 (669?). Although operations above 660 are not uncommon anything over 661 is considered flooding and in the history of the Lake there has been only seven times levels have reached above 662, twice in 2015 alone though which is a bit ominous. The wide range for these charts allows for these extreme events to be included in multi-year analysis with visual consistency.
The old charts allowed the scale to change dynamically according to the data which had the affect of exaggerating the graphs. For the new graphs I’ll be keeping the scale the same (645-665) throughout the year. The scale is the same as Amerens because they can, and do, allow the lake to swing well above the “normal” operating range (figure 5 line black) or well below it (figure 5 orange). Since these graphs are for the full year, it is necessary to allow for the widest possible range of levels. It is very unlikely levels will drop below 645 (although it has happened!) but I have made that the bottom limit of the graph (figure 4) rather than Ameren’s 640.

That's about it for the new charts. As time permits I'll revisit data from years passed and create at least new full year charts for download. As for the monthly reports, I'll continue to produce the old charts as well as the new ones.