Update June 2018 - New wake restrictions have been passed and signed. The following was an analysis of an earlier proposal that did not pass.

With one week to go before the November 4th open forum area legislators are regarding, among other things, boat wake regulations. One of the more prominent ideas being floated to control wave issues on the Lake of the Ozarks is a no-wake restriction for any "large" boats where there is less than 1250 feet of open water from shoreline to shoreline. While this idea would probably have the desired effect of reducing the roughness of the water, at least off the main channel, it would likely have a negative impact on lakefront property values, and possibly the local tourism industry as well.

Let's start by taking a look at some images, starting with one of the Grand Glaize bridge for an intuitive idea of just how far 1250 feet goes on the lake.


Measured at the south side of the bridge, the bridge is just over 1470 feet from end to end, barely over the proposed shoreline to shoreline restriction criteria.  With this rough scale in mind we can look at some of the largest coves on the lake starting with Horseshoe Bend.

At mile marker 1, north side of Horseshoe Bend, near the dam, shore-shore distance is about 1200 feet. 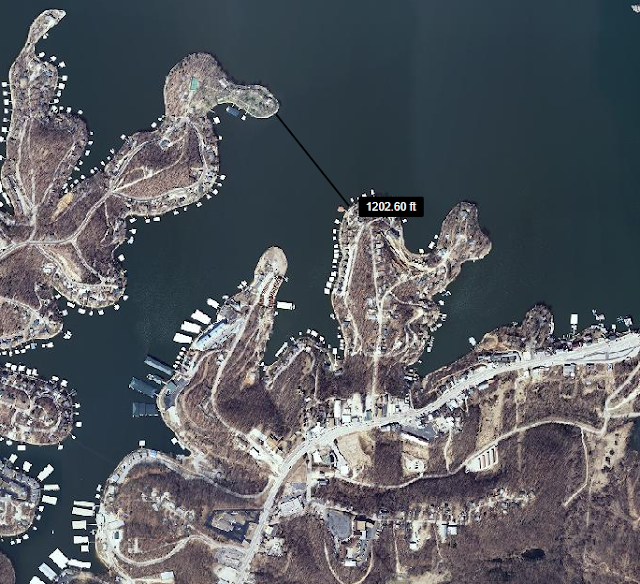 This is the large cove at the 6mm on the north side of Horseshoe Bend at 1229 feet.

Workman Hollow Cove at the 8mm with 1163 ft. at the mouth of the cove.

Further upriver, at the 13mm on the north side of Shawnee Bend lies one of the largest grouping of coves on the lake, and it too would see wake restrictions.  While the main opening would not be restricted (represented by the grey shaded area with dimensions), venturing into any one of the three branch coves would be.

Further up the lake, on the north side of Turkey Bend at the 21mm is another large cove that would see restrictions.

Another at the 28mm near Linn Creek Bend. 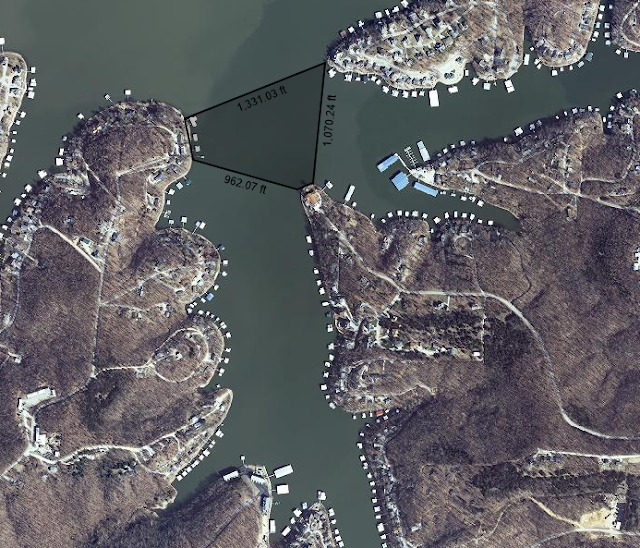 Entire sections of the lake come into question, notably the aforementioned Niangua River Arm from at the 8mm.  From the measured location to the end of the lake, just past Ha Ha Tonka wake restrictions would be imposed. 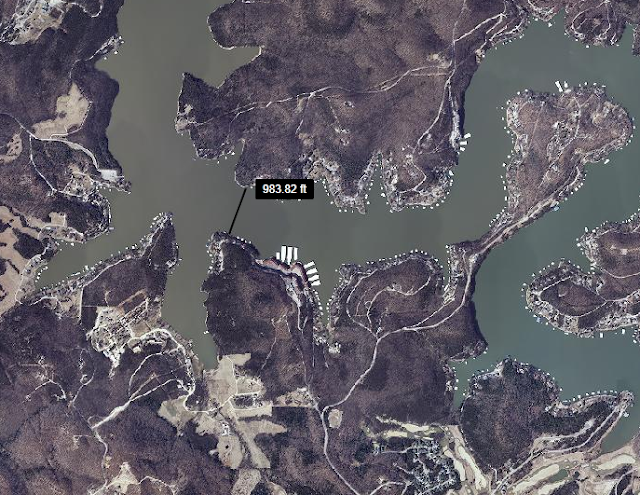 What a 1250 foot restriction would mean from the 31mm to Truman Dam is harder to say, given the general narrowness of the lake in this area, but it is likely the last 10 miles of the lake would be no-wake.

In short, it would be easier to show where restrictions would NOT be put into place rather than try and indicate all of the affected coves. Large boats, assuming by large it is meant boats over 30 feet would be restricted to making speed only in the main channel throughout the lake. It is apparently no accident that 1250 feet was chosen, as it would obviously have the intended effect of eliminating large wave activity in nearly every cove on the lake.  There would be consequences for this regulation however, and not all of them good.

Let's use Cornett Branch Cove, at the 6mm, as a simple example.  This cove is also known as "Millionaire's Cove" as it was one of the first large coves to be developed with very expensive homes. It was in fact the first "Party Cove" until homeowners grew tired of the antics and managed to have a no tie-up rule enacted just for their cove. This cove is over a mile long from its deepest recesses to the main channel and home port too many large boats.  If the 1250 regulation is enacted it is highly likely these boats will no longer be able to make speed once in the cove and could easily take a half-hour traversing the last mile home.  A boat ride that ends with idling for long periods of time gets old very fast and it won't be long before property at the back of deep coves is no longer valued for its calm water, but de-valued for its long commute to the main channel.

At the opposite end of the spectrum are owners on or near the main channel who already take the brunt of large waves.  With the 1250 rule it's not hard to imagine that large boats that might otherwise have gone slower, producing less wake, will now feel compelled to make speed once they finally do make it to open water, making matters worse than they are today.

Large wakes and rough water on the Lake of the Ozarks is nothing new but, boats are getting bigger, bigger and faster, as lakefront property with protected water becomes more scarce.  The 1250 rule would attempt to treat all property as equal at the expense of boat owners who are almost always one and the same, pitting their own interests against each other.

Let's hope the forum introduces some new ideas, because this one is terrible.