Data visualization is a hot topic in my industry, and one I personally enjoy despite not being very good at it.  One of the things I've been wanting to do for sometime is to add what are called "candlestick" graphs to the monthly lake level reports. I've done this type of charting before, in February 2014, when Ameren basically sent a small tsunami down the Osage river from a rapid discharge from the lake. I liked the chart, but it was bit labor intensive. I think I've figured out an easy way to produce it on a monthly basis now. For those familiar with stock market analysis, candlestick charts are the preferred graph for looking at stock prices over time. They tend to weed out the "noise" of daily trade prices and focus on the more important trends.

Using candlestick charts on lake levels will allow us to focus more on starting and ending levels and diminish the relevancy of the day to day highs and lows, while visually emphasizing large swings. For those who are not familiar with candlestick charts, or how to read them, they are quite simple but I've written a guide here, as it relates to tracking lake levels.

So here's the first, going back to July's data. (I even dolled it up with a nice background!) 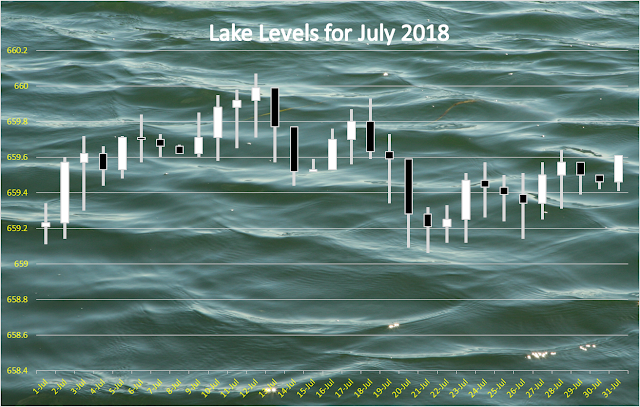 As you can see, there's only 31 data points now, one for each day, rather than 746, one for each hour of the month, while basically providing the same information detail.

I'll try to add other elements to the graph such as the 5 year moving average and flow rate as time allows, but for now, I think this will be a great addition to the monthly lake level post. Hope you like it!