Another year has come and gone, and with the annual draw down to prepare the lake for 2019 only days away, let's take a look at what happened in 2018.

Here's a quick summary graph that I made to try and put things in perspective. The lake is still just a flooded river and water flows in and out constantly. Putting up raw numbers like nearly one and a half trillion gallons of water passing through Bagnell Dam sounds impressive but what can we do to give it real meaning?  I've provided some conversions to help get a grasp of just how much water that is. Also, the circle in the middle with percentages indicates Bagnell Dam's operational statistics, how much of the time electricity actually was being generated. The answer is only about 25% of the time. 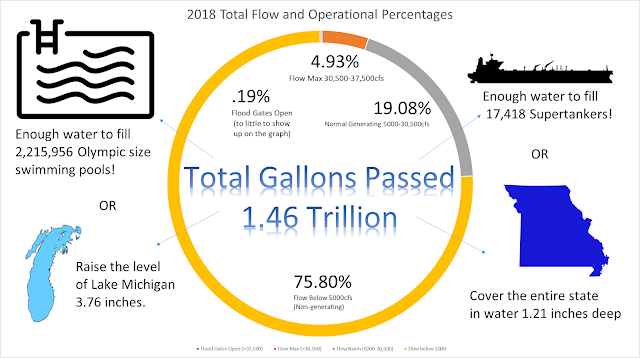 Operations in flood conditions were negligible, and I doubt the gates were actually open at all, I simply calculate that the maximum flow through the turbines is anything over 37,500cfs (cubic feet per second), but improvements to the turbines may have increased that number. I'll have to revisit that.  The more telling number is the 75.8% operational time below 5000cfs, an indication no commercial electrical power is being generated beyond the "house" generators used to power the Osage Energy Plant itself. This is a very low amount of power generation, and may be due to the extensive work being done this year on Bagnell. In short, Bagnell Dam was probably operating at a loss this year.

As far a lake levels themselves are concerned, this year is probably the most unremarkable we've had since 2012. Levels were right along the guide curve with no surprises.  Below is the candlestick summary for each month of the year. 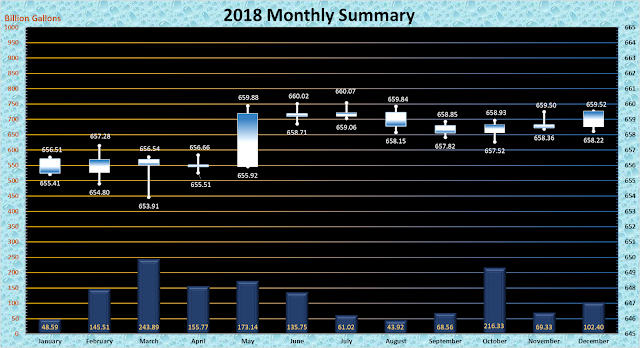 Below is the daily candlestick for the entire year.